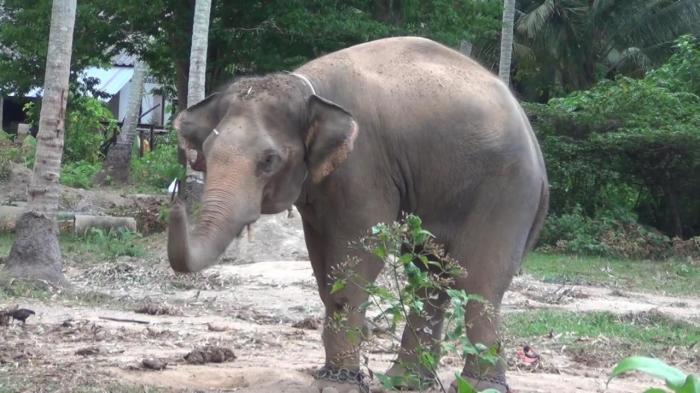 KRABI: An enraged bull elephant stomped his mahout to death at a trekking camp in Ao Nang on Saturday.

The 12-year-old male elephant named ‘Plai Sridor Nakorn’ was in musth – an annual period of heightened testosterone levels – and had been chained up after becoming highly aggressive.

The animal killed Anantamek Thongtae, 21, when the mahout attempted to unchain him.

“According to witnesses, the elephant grabbed Mr Anantamek with his trunk, threw him to the ground and then repeatedly stomped on him,” said Lt Col Noppadol Mukda of the Krabi City Police.

The elephant had been chained up for about five days; a sign was put up warning visitors not to approach the aggressive pachyderm.

“We felt sorry for him, and he appeared to have calmed down, so Mr Anantamek and I decided to give him a bath,” said fellow mahout Prasert Raksakij, 22. “I got on the elephant’s back while Anantamek unchained his front leg – this is when he attacked.”

Mr Anantamek was pronounced dead on arrival at Krabi Hospital.

The elephant was still chained up when officers arrived on the scene.

“He was still in musth and wouldn’t let anyone near him, said Col Noppadol.

A mahout was similarly trampled to death at an elephant camp in Phuket in 2014 (story here).

Plai Srido Nakorn will remain chained up until musth passes. He will then be allowed to return to work, said Col Noppadol.