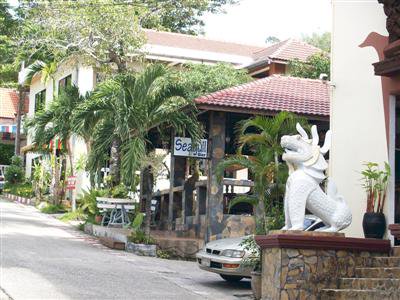 Astro Supersport is included in packages offered by many local cable television operators, which offer about 60 channels for a monthly rate of 350 baht a month, less for long-term subscriptions. It is currently the only television option among bar owners in Phuket seeking to provide English-language commentary of World Cup matches to patrons.

A representative of one of the cable operators, Phuket Cable TV, said the company pays for the right to transmit the signal to its subscribers under a one-year, renewable contract.

Last night’s raid was at a restaurant on Soi Kebsup in Patong, where officials also levied fines for playing copyright music to patrons without the necessary license, according to the source.

There is still some confusion regarding who was behind the raid, however.

Kathu Police today confirmed that there had been a raid, but said it was conducted by the office of the Kathu District Chief.

However Kathu District Chief Siriphat Phathakul denied his office was cracking down on intellectual property violators.

His men did raid the operators of the Seagull Bar on Soi Veerakit off Nanai Road on Wednesday for staying open past the mandatory midnight closing time on eateries, but only after the owners ignored numerous warnings about noise.

Led by chief administrative assistant for security Jirawat Namat, the arrests were not related to copyright infringement, he said.

Nevertheless, many bar owners in Patong are now worried that airing games on the Astro Supersport network could get them in trouble.

The issue of English-language commentary on football matches in Thailand has become a hot topic among the resident expatriate community and visiting tourists, some of whom have traveled to Thailand specifically to enjoy the World Cup.

Andrew Scott, a 30-year-old football-loving Phuket expat, said commentary in a language he can understand helped him get more engrossed in the action.

“Thai commentary doesn’t do that because you’ve got no idea what’s going on,” he said. “You just end up standing in front of the screen and speaking with your friends – and missing parts of the game.”

RS sold the rights to HD broadcasts of the games to TrueVisions, the country’s only legal satellite provider.

Many bar owners snapped up the HD package, thinking they’d be getting English language commentary – but they didn’t.

One bar owner in Chalong told the Gazette that TrueVisions did not tell him the commentary would be in Thai. “If I knew this, I wouldn’t have spent the money,” he said.

So why didn’t TrueVisions buy English commentary in the first place?

Chulathai Saligupta, senior manager for sports programming at TrueVisions, said, “This is not the fault of RS International Broadcasting, but is due to restrictions by the original provider of the World Cup, Fifa, which is not allowing English commentary in Thailand due to the high broadcast piracy problem among neighboring countries.”

The owner of another popular bar, this one in Phuket Town, said he had changed his cable TV supplier and would be showing the games with English commentary – “until it gets banned,” he added.

Do you know of any venues that have been raided due to copyright violations lately? Help the Gazette by posting in the forum below or sending an email to: editor@phuketgazette.net

Work on new Phuket incinerator to start next month