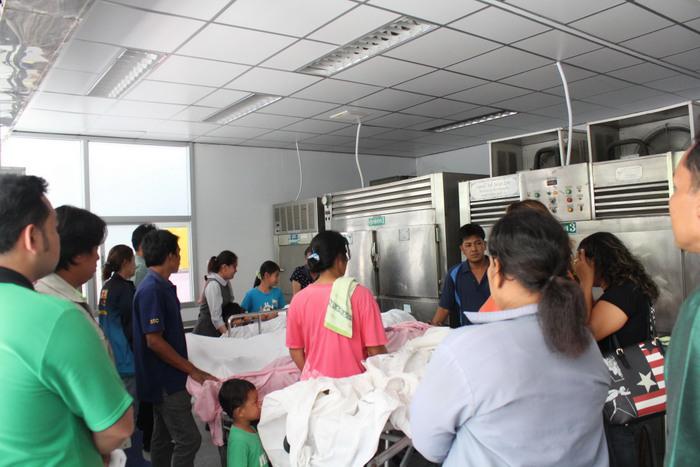 PHUKET: The investigation into the deaths of four workers in a Phuket Town sewer last month has ruled that the two companies involved will face fines only.

The news follows the Phuket office of the Department of Labor Protection and Welfare (DLPW) concluding its investigation on Saturday.

“The next step is to send the case to Phuket Governor Maitri Inthusut,” said Saijai Luesup, who headed the investigation. “He will review the case and decide how much to fine the companies.”

The maximum fine that can be imposed per company is 400,000 baht per incident, not per death, as stipulated by the Occupational Safety, Health and Environment Act 2011.

The act also mandates that provincial governors decide on the fines to be imposed on employers in cases where the DLPW rules that the employer under investigation should not face a jail term or criminal negligence charges.

“However, if they do not pay the fines, we will hand the case over to the police so that they can press charges. The criminal charges in these cases carry a fine of up to 400,000 baht, up to one year in prison, or both,” Ms Saijai said.

The four workers died on March 26 after becoming overpowered by lethal amounts of hydrogen sulfide in the sewer they were cleaning. Four others were hospitalized because of the fumes (story here).

However, Ms Saijai said her investigation found that the workers were mainly at fault for their own deaths.

“From the statements given, we learned that the maintenance team followed most of the regulations before they went down into the sewer, but did not wear the appropriate safety equipment,” she said.

“The workers made a grave mistake by not wearing their masks and safety gear. All of the equipment was found in the car next to the site.”

Two representatives from Southern Thai Consulting Co Ltd, the company that directly hired the four workers, attested that the workers attended a safety and job-planning meeting on the morning of the accident.

“The workers arrived and, as part of the safety regulations, opened the sewer and allowed it to air out for 30 minutes. Then they tested the gas inside to make sure it was not at a dangerous level. The first results came back safe, so Thawat Chitchollatarn went into the drain,” explained Ms Saijai.

“Mr Thawat was in the sewer for 10 minutes before he came back up to report that the odor in the pipe was overwhelming him. The workers then decided to air out the pipe for 15 more minutes before Mr Thawat went back down. The second time they aired it out, they did not re-test the gas levels.”

Minutes later, Ms Saijai explained, Sanan Buachoom noticed that Mr Thawat had fallen unconscious, so he descended the ladder to assist him. The other two men, Apisit Tipprasong and Mr Thawat’s brother Suchet, watched as Mr Sanan passed out as well, so they went inside in the attempt to rescue the others.

The foreman overseeing the four workers was standing by during the entire sequence of events, watching as the four men fatally entered the sewer one by one, Ms Saijai confirmed.

However, she added, “There is no need to name the foreman because the investigation has concluded.”

Pimook Sornmee, manager of Eastern Thai Consulting, on March 27 branded the incident “both an accident and a mistake” (story here).

The Phuket DLPW office will now investigate the fatal fall from a bungy-jump tower that killed two men on Friday night (story here).

“I have just received word of the bungy-jump accident in Chalong. We will be investigating this case next and will call everyone involved to the office as soon as possible,” Ms Saijai said.