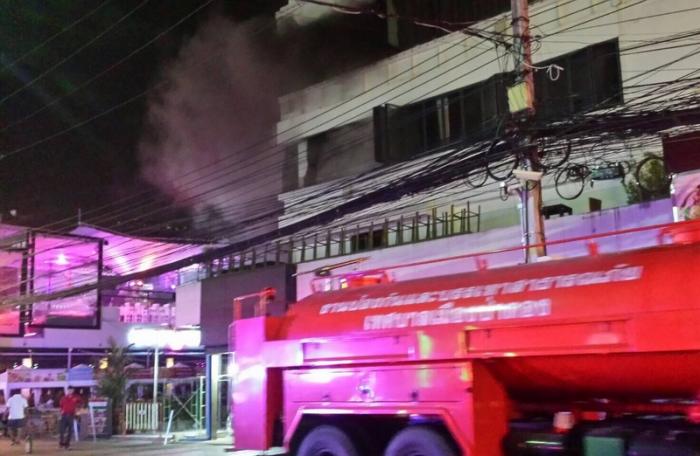 PHUKET: The cause of a fire at ‘Seduction’ discotheque on Soi Bangla, Phuket’s infamous party street, is believed to be an electrical malfunction in a ceiling fan.

The fire started at about 7:45pm on Saturday.

Six firetrucks arrived at the scene, with firefighters working for at least two hours to calm the flames that took over and extensively damaged the second and third floor of the four-storey building.

Luckily, firefighters were able to control the blaze from spreading to the fourth floor.

An employee named Prakarn Suwee was treated for smoke inhalation, but all guests and staff members were safely evacuated and no other injuries were reported.

A team was set-up to look into the cause of the fire, but no details about the extent of the damage have been made available yet.

“We investigated the damaged areas and also watched CCTV footage, which indicated that a ceiling fan on the third floor stopped working and started sparking. The sparks quickly developed into a full-fledged fire,” Lt Col Somsak Thongkleang of Patong Police told the Phuket Gazette.

Police are continuing their investigation to uncover further details.