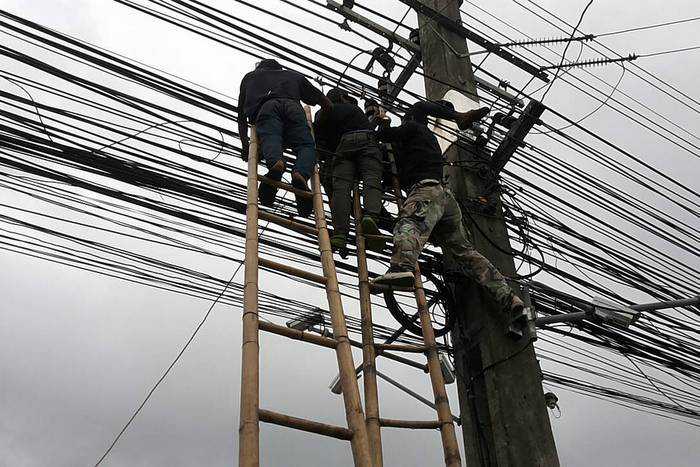 PHUKET: A Phuket TOT worker was rushed to hospital after suffering an electric shock while installing cables near the Baan Kamala Intersection yesterday afternoon.

Kamala rescue workers arrived at the scene at about 2pm, where they found two men attempting to remove 19-year-old Boonlong Taweepa from a hodge-podge of wires, Lt Solae Damad of the Kamala Police told the Phuket Gazette.

“We were hired by TOT to install internet cables, which are separate from the electrical cables,” said Yutthawat Muangmeesri, Mr Boonlong’s co-worker.

“He was up there while we worked on the ground, moving the ladder for him. I don’t know exactly what happened. He was working above us when we heard a bang.

“I called the police for help, then my co-worker and I used another ladder to reach him so that we could get him down after we made sure that there was no electricity running through the cables.”

Kamala authorities arrived with a ‘cherry picker’ to help lower all three men to the ground.

“Mr Boonlong was not fully conscious when he was rescued from the cables, and was taken to Patong Hospital,” Lt Solae explained.

Lt Solae also issued a warning to any persons working on internet or electrical cables.

“Please be careful when you are working close to electrical cables, especially in these wet conditions,” he said.