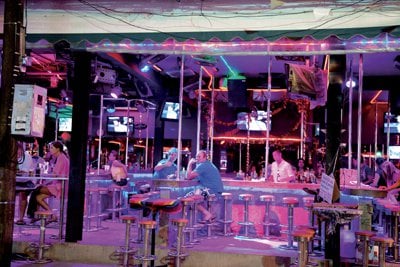 PHUKET: The mandatory ban on the sale of alcohol for upcoming elections at the end of this month will cost Patong’s nightlife industry at least 5 million baht a night, the Phuket Gazette has been told.

The sale of alcohol will be banned across Phuket on August 26 and again in Patong on September 2 as voters go to the polls for local elections.

On August 26, the ban goes into effect as residents vote in the Phuket Provincial Administration Organization (OrBorJor) council election. In accordance with the Election Act, it will be enforced from 6pm on Saturday, August 25, and continue through to midnight on Sunday.

The two elections together mean that entertainment businesses in Patong will be banned from selling alcohol for four nights in nine days.

“I know that there will be a big impact on the night entertainment industry, but we understand that elections are also very important,” Patong Entertainment Business Association (PEBA) President Weerawit Kurasombat told the Gazette.

However, Mr Weerawit added that a positive note of sorts was that the elections were being held during Phuket’s tourism “low season”, reducing the effect the bans will have on entertainment venues’ overall annual revenue.

“If this happened during the high season, night entertainment venues would suffer twice as much,” he said.

However, Mr Weerawit added that so far 2012 was not a good year for the entertainment businesses in Patong.

“This year we are not doing as well as we did during low season last year, but we are still doing okay. Normally, tourists start to return in large numbers at about the end of November. That is when the tourism industry high season usually starts in Phuket,” he said.

Mr Weerawit also told the Gazette that he had received no updates from the central government on whether the Thai Cabinet would consider making Patong a Special Administrative Zone. Such a move, which has been publicly supported by Pheu Thai Government Spokesman Prompong Nopparit, could provide a way for authorities to relax the rules in key tourist areas.

Mr Prompong voiced his support for the “Special Admin Zone” initiative while literally standing on Soi Bangla in January in front of a crowd of polite protesters from Patong’s nightlife industry.

The protesters were calling for extended trading hours within Patong’s designated Entertainment Zone.

Mr Weerawit told the Gazette that he had yet to hear any updates on that request, either.

Belgian ‘Most Wanted’ arrested in Phuket