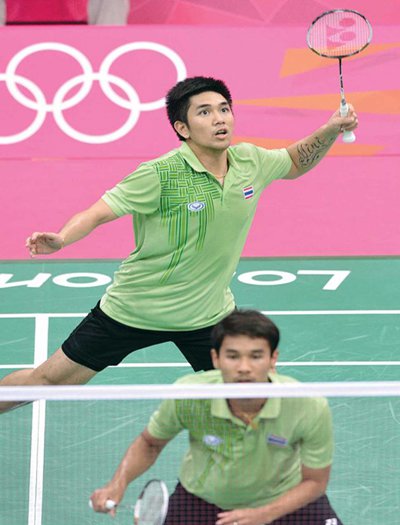 PHUKET: Despite bitter disappointment for world No 22 Boonsak Ponsana, Thailand’s badminton team have kept the flag flying in the 30th Olympic Games, with the men’s duo of Bodin Isara and Phuket’s Maneepong Jongjit storming their way into the last 16 thanks to two straight wins in the group stage.

Local No 1 and this year’s Singapore Open champion Boonsak found world No 3 and third-seed Chen Long from China too strong, going down tamely 21-12, 21-17 in their do-or-die Group E showdown for a place in the knockout round.

The hard-attacking shuttler from Hubei improved his head-to-head record against the former Thailand Open champion to 2-2. The Thai’s loss snuffed out Boonsak’s dream of bettering his fourth place at Athens 2004 in this, his fourth and final, Olympic Games.

One of only three players in the group, three-time world junior champion Ratchanok needs a win in her next match against lower-ranked Portuguese Telma Santos to book her berth in the last-16 knockout phase.

The 17-year-old from Yasothorn plays Santos tonight at 7:42pm Bangkok time. “My first match here was not that good. I think I played nervously at the start,” said Ratchanok after winning her debut Olympic match.

Thailand’s big surprise came in the men’s doubles when world No 19 Bodin and Maneepong made a stunning start to beat No 6 Ahsan Mohammad and Bona Septano from Indonesia, 21-11, 21-16 in Group B.

The Thai pairing continued their terrific form to shock world No 4 Ko Sung-hyun and Yoo Yeon-seong from South Korea, 21-15, 21-14. The Thais have made sure of a berth in the knockout stages.

Shooter Sutiya admits pressure was too much
Phuket Gazette / The Nation

PHUKET: Skeet shooter Sutiya Jiewchaloemmit swallowed her disappointment on Sunday and said she would look ahead and give it one more try following her below-par result in the Olympics women’s competition.

The 26-year-old, one of the country’s medal hopes at the London Games, delivered the message on her Facebook page after she failed to make the skeet final, firing an off-target score of 25 for 11th place.

“Disappointment is part of being an athlete. You win and you lose, and after you lose you can win again. The only thing you can do is to look ahead and try your best again and again and again,’ she posted.

Following her fourth-place finish in the 2008 Beijing Games, Sutiya vowed she would give her best to win a medal in London and spent a month training in Germany at her own expense before the competition.

But high expectations coupled with tension took its toll on Sunday, and she was nowhere near her best form, shooting just 20, 23 and 22 for a three-round total of 65.

Normally someone who projects a tough persona in public, Sutiya failed to hold back her tears in an interview given to the media immediately after Sunday’s result.

“I have only myself to blame. I didn’t shoot well; others did. I just didn’t make it. I guess I had such high hopes that I put myself under too much pressure,’ she said.

Pimsiri, 22, got the silver medal with a total of 236 kilograms from her two lifts, while Li Xueying won China’s second weightlifting gold medal of the London Olympics.