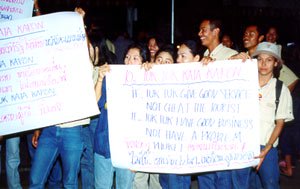 PHUKET TOWN: About 70 staff from five eco-tour companies gathered in front of the Tourism Authority of Thailand (TAT) office on Phuket Rd last night to protest the “bullying” behavior of tuk tuk drivers in the Kata-Karon area. The protest blocked traffic for about an hour. Anupharb Thirarath, director of the TAT Phuket office, was handed a letter by the group, urging him to help stop tuk tuk drivers from threatening eco-tour staff. Boonchouy Areerob, managing director of Southern Eco Nature Tour Co, described a recent incident that prompted the protest. He told the Gazette that on March 19, an eco-tour company sent a driver to pick up a customer at the Club Mediterranean Resort in Kata. When the driver returned to the car with the customer, he found a slip of paper stuck on the front glass, which warned that the safety of the staff, cars, and customers of eco tour companies “could not be guaranteed” if they continued to pick up customers in Kata-Karon. The paper was unsigned. “[The tuk tuk drivers] want exclusive rights to pick up and drop off our customers,” K. Boonchouy explained, “but we are doing a different job. We’re not stealing their customers.” He added that some tuk tuk drivers have said that they don’t want to see Land-Rovers – the vehicles often used by eco-tour companies – picking up customers in Kata-Karon. The protest came less than a week after representatives from Island Safari, Siam Safari, Amazing Boukit Safari, Southern Eco Nature Tour and Baan Chang Safari made a complaint to Chalong Police. Police called in both sides but no agreement could be reached. The TAT’s K. Anupharb said, “We will talk to both sides to solve the problem.” However, he added that he did not want to see the tuk tuk drivers get their way, since this would disrupt business and encourage drivers from other areas to do the same. It was rumored that a group of Kata-Karon tuk tuk drivers were planning to retaliate by blocking the road near the entrance of Le Meridien Phuket resort, but all remained quiet.

A glorious act of philanthropy