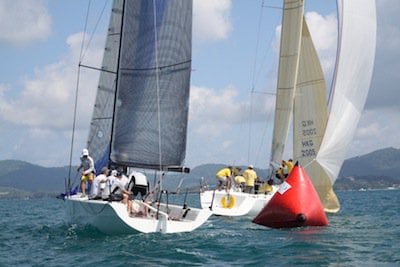 PRO Simon James announced a scenic island course for all classes – Course 39 for all except the Classics who were set Course 23. After two days of windward/leewards for many classes, this was a chance for some to stretch their legs. A second race, a short windward/leeward, was then set for IRC Racing, Firefly One-Design and Multihull Racing classes.

First off the line was the 13-strong IRC Racing. With three divisional splits and trophies (IRC Racing I, Sportsboats and IRC Racing II), plus an overall IRC trophy, there is plenty to play for. Wan Marang (Kevin Whitcraft) got a good start along with Brace! Brace!! Brace!!! (Paul Murphy). Wan Marang lead the fleet around the course using local knowledge to help them navigate the tricky currents and wind holes. A close battle with Katsu (Ben Copley) all the way around saw them passed on the last upwind leg of Race 1 with Katsu beating them over the line by just 10 seconds. Despite taking line honours, the glory was Jing Jing‘s (Rick Pointon) who won on corrected time.

Following a General Recall, Race 2 got underway and Jing Jing continued their winning ways making it two from two on the day and five from six overall. Jing Jing look to have one hand on two trophies – IRC Overall and IRC Racing I – going into the final day. Two second place finishes today moves Wan Marang upto second in the IRC Overall standings.

In the Sportsboats class, Surf Patrol (Ray Waldron) sailed a solid race around Bon Island and scored a win on corrected time in Race 1, only to be beaten into second place in Race 2 with Brace! Brace!! Brace!!! taking the win. Going into the final day only one point separates to the top two.

IRC Racing II enjoyed the scenic islands course with Moya Hin (Peter Jones) getting a great start to lead around Bon Island and win line honors in Race 1. Ruby Tuesday (John Vause) did well to keep her in their sights and scored the win on corrected time by two minutes.

After finishing only fourth in Race 1, Skandia Endeavour of Whitby (Stuart Williamson) upped their game to finish second in Race 2 behind Phoenix (Niels Degenkolw), leaving them tied on points with Ruby Tuesday with one day to go.

A single race for IRC Cruising saw Remington (Jim Ellis) get the best start and go on to score the daily double and move upto second overall, one point behind Sail in Asia (Mike Downard). Only two points separate to the top three.

In the Firefly One-Design class, Voodoo (Hans Rahmann) started last but sailed well around the course and clawed their way back to score two firsts today, making it six from six overall and securing the series trophy one day early. Voodoo has produced a masterclass of one-design catamaran racing, hot on the back of their win at the Phuket Multihull Regatta. Tomorrow will decide the minor placings.

Multihull Racing played out true to form at the top with DaVinci (Mark Pescott) scoring two more first places today, adding to their tally of six – a clean sweep – wrapping up the class victory one day early. However, the performance of the day goes to Nina (Bob Cullen) who finished second, tied on corrected time with Miss Saigon (David Liddell) in Race 1. Nina went on to score another second in Race 2, leaving them second overall and three points clear of Miss Saigon going into the final day today.

Despite McBob The Boat (Joe Gruba) finishing ahead by almost one hour in the Classic class, she lost out on handicap to reigning champion Idiom (Mark Myking). In the overall standings, just one point separates the four boats in the class as Sirius (Simon Morris) and McBob The Boat are tied at the top, and Idiom and Seraph (Captain Bao) are points-tied one point behind with all still to play for today.

For more information click here. The Phuket Gazette and PGTV are proud sponsors of the Cape Panwa Hotel Phuket Raceweek.