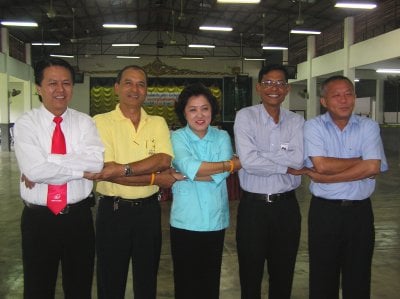 PHUKET CITY: Today was a busy day for the Phuket Election Commission (PEC) after it opened registration at Satree Phuket School for candidates in the Senatorial race.

Because all three were waiting to register before the doors opened, they drew lots for their election numbers, to which great importance is attached. K. Prawat drew the significant No 1, with K. Akkrawat getting No 2 and K. Uthai No 3.

Dr Prasit Koeysiripong arrived to register at 9 am, being awarded No 4, and Thanyarat Achariyachai, arriving minutes later, got No 5.

The Head of the PEC, Dr Prapa Kayee, said, “At the moment, we have five registered candidates. Another three people have submitted documents for us to check, but that does not mean there will be only eight people standing – there may be more because candidates have until next Tuesday [March 28] to apply.

Dr Prapa said she expected a voter turnout of around 75% for the Senatorial election “because people seem interested these days in using their their voting rights”.

“I urge the people of Phuket to vote, both in the parliamentary election [on April 2] and the Senatorial election,” she said.

“In the last Senatorial election we had a turnout of 76%, which was higher than anywhere else in Thailand. I hope we won’t lose our first place.”

The Senatorial election will take place on April 19.