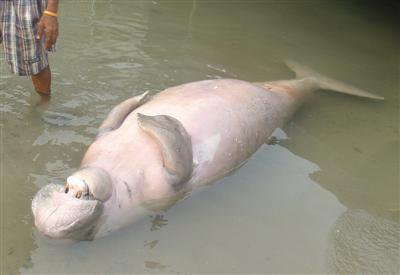 PHUKET: The fishing industry continues to take its toll on Thailand’s highly endangered dugong population, with at least three deaths so far this year.

Dugong researcher Karnchana Adulyanukosol of the Phuket Marine Biological Center (PMBC) said two dugong carcasses were recovered in waters off Trang in January and sent to the PMBC for autopsy.

Both animals were likely killed by fishing equipment, she said.

The first was a 2-meter-long, 140-kilogram female recovered by local fishermen on January 22 with severe cuts to the left tail fluke, which was almost completely severed.

Using the damaged tail to swim must have caused the dugong a great deal of pain and suffering before her death, Miss Karnchana said.

She estimated the dugong’s age at about two years.

The second carcass was discovered two days later. It was a mature, 2.8-meter-long female, aged about 50 years.

At 358 kilograms, the sea cow appeared to be healthy at the time of death and had plenty of food in its digestive tract.

Miss Kanchana cited entanglement in a fishing net and drowning as the most likely cause of death.

The PMBC researchers noted that the animal’s two tusks were cut off some time after its discovery and before its arrival at the PMBC at Cape Panwa.

She suspects they were cut off by someone who noticed the animal in the back of the pickup used to transport it to Phuket.

“People use dugong tusks as accessory items because they are rare and similar to ivory. Some people also believe they can be used for medicinal purposes. A pair can fetch as much as 20,000 baht on the black market,” she said.

A third dugong, a juvenile recovered from waters off Koh Libong in Trang on April 10, is still at the PMBC awaiting autopsy.

A 10-day aerial study conducted by the PMBC off the coast of Koh Libong earlier this year sighted about 125 animals.

The study revealed a small decline in overall numbers, but allayed fears that the local population was doomed to extinction in the short term.