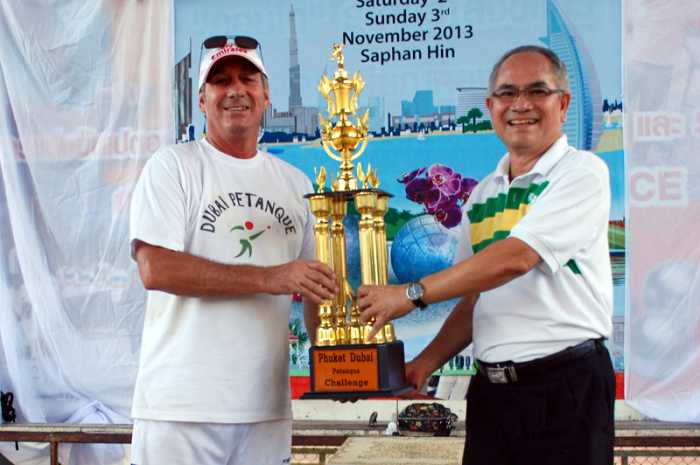 PHUKET: Dubai Petanque returns to Thailand to take on teams from Phuket and France in a two-day round-robin tournament starting on November 1.

Phuket Petanque Club last November shook Dubai Petanque with a 48-20 win, and there is no doubt that Dubai will be looking for revenge.

The three-way contest will be a modification of last year’s Grand Slam Tournament, in which Dubai took on a Saphan Hin-based team in its first international competition.

The Rawai Petanque Club, a bastion of Phuket’s French community, will be flying the tricolor on the weekend.

Dubai Petanque’s Thailand foray underscores the determination of club president Marc Molatte to build the club’s status in the United Arab Emirates, a jurisdiction which has been slow to recognize the merits of minority sports.

Each of the three teams will field six doubles units to play 12 matches, six against each opponent.

Dubai awaits confirmation on the availability of star player Tunisian Karim Kahla, who may be unable to make the trip due to work commitments.

However, Italian Carlo Galli is enjoying a rich vein of form and will be seen as the team talisman.

Khalil Ibrahim, a stalwart of Dubai Petanque until his move to Malaysia earlier this year, will be welcomed back in team colors to represent his old club.

Lung Tormor, an official at Phuket Petanque Club, is likely to reprise his role as captain for the Phuket side.

Jaruwat Chernonsong and Jaroon Gerchoo will again look to pose problems for opponents with their matchless mix of pointing accuracy and devastating shooting.

In a tourney in which women play on an equal footing with men, the strength of Thailand’s female players will be represented by Boonta Salaman and Wanlee Singtongyam.

Salaman’s triples unit was unbeaten last year with six out of six on the second day.

Future of Phuket’s jet-ski operators to be decided next week: officials