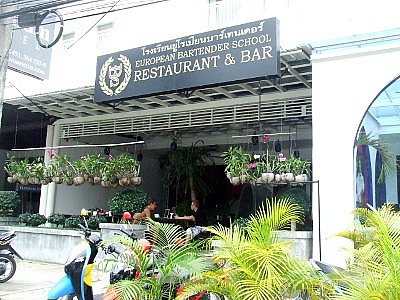 PHUKET: A group of young foreigners out celebrating their graduation from the European Bartender School in Patong received a lesson in Phuket bar etiquette this week when one man was chased down and “vigorously apprehended” by tuk-tuk and motorcycle taxi drivers.

The objection among the drivers was the rough treatment given to a Thai barmaid following a disagreement late Thursday night over the bill at the Ice Bar, off Soi Bangla.

Following the altercation, the Thai woman involved was taken to Patong Hospital to receive treatment for injuries, and a doorman at the Tai Pan nightclub saw two foreign men running into Soi Sunset, at about midnight.

“They ran into the soi, which is a dead end, chased by more than 10 Thais, including police and a few Thai girls. After about half an hour, one of the two men was led away by police. He had blood on his face,” the doorman told the Phuket Gazette.

The man, from Denmark, was arrested and held overnight at Patong Police Station.

Police Duty Officer Teerasuk Boonsang said the man, whom he declined to name, was released the next day.

“They were really drunk at that time. The Dane didn’t want any problems with this as he and his friends had just finished the course and are supposed to leave soon,” he said.

“Mediation between the parties at the police station was successful and finished at about midday [yesterday], so the case will not go to court. It was agreed [the Dane] would pay for the girl’s medical treatment and damages to the bar,” the policeman said.

However, a staff member at the school told the Gazette, “I have heard different stories. I was told that the foreigners did not hit the ladies. They wanted to get out of the bar so they pushed them.

“But one lady was pushed onto the floor and they ran out of there – and then later one of the guys was caught in a dark alley and beaten up by some Thai guys. That’s all I know,” he said.

“They have been here for four weeks, and they were heading out for a good time. I am not saying the ‘students’ are innocent, but it seems many people got excited,” he said.

“Everything was a big misunderstanding and got out of hand. We do not have any hard feelings against the Ice Bar because we think it’s cool. I always take my students there.

“I know they are a little upset, but I hope they don’t have any negative feelings toward us. It was just a big misunderstanding,” he added.

“We can’t condone any violence against tourists, but some foreigners who come here get what’s coming to them. We are very grateful to the motorcycle drivers for what they did,” he added.

The owner of the Ice Bar said he was also happy to leave the incident in the past.

FILE PHOTO: 3 managers involved in the Kolour superspreader event have been charged.

Police were called to the scene of a gruesome motorbike accident just after midnight in the Kathu area of Phuket, where a woman was impaled by a steel rod. The 34 year old woman crashed her motorbike into a concrete power pole on Wichit Songkram Rd between the Kathu Shrine and Kathu Municipality. rescue workers responded, and together with police, they arrived to find the woman still hanging from the power pole.

Khanuengnit Onoaun was driving a black and pink Honda Click motorbike and may have been speeding just before being impaled by the rod on the electric pole. Her motorbike was lying nearby the pole with significant damage to the front of the bike and the front wheel.

CCTV footage recovered from the scene suggest that the woman may have fallen asleep and crashed into the power pole. The pole had steel rods protruding from its side that utility workers use to climb when service or repairs are needed to the electrical lines, which is what impaled her when her motorbike hit the pole.

The metal rod pierced the woman’s upper chest and went all the way through her body with about 2 inches exposed on the other side of her as she hung from the pole. Rescue workers could not remove her from the steel rod at the scene of the accident safely and instead chose to cut the rod to take her off the electric pole and into an ambulance. Cutting through the steel took about 5 minutes for the rescuers.

She arrived and was admitted into Vachira Phuket Hospital with the metal rod still impaled through her chest. The hospital had no updates about the woman’s condition after her motorbike crash other than that she is alive and receiving treatment currently. The police plan on questioning her once she has had time to recover and investigating the incident further if necessary.