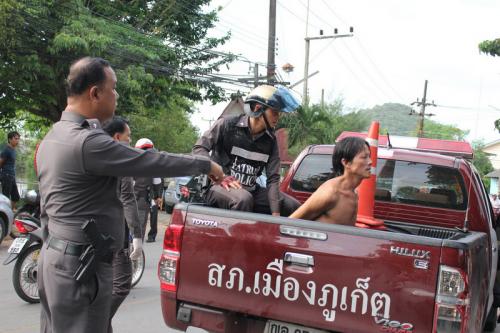 Maj Rattaket Munmuang of the Phuket City Police – with about 30 other officers – arrived at the scene at about 8:30am to find that the man had exchanged the loaded gun for nunchucks.

The 46-year-old man, Phongsak Pitchyaphan was reportedly angered by a child running out in front of his car while he was driving along the narrow street.

He narrowly avoided hitting the child.

“He shouted at us to stand back,” said Maj Rattaket.

“We blocked the street with two pickup trucks and started talking to him. After a while, he calmed down and put the nunchucks down,” he explained.

Officers searched Mr Phongsak’s car, which was parked nearby. They found a .38 handgun still loaded with four rounds of ammunition in the glove compartment.

“We took him to the police station for further questioning. He did not test positive for drugs, but he was under the influence of alcohol,” Maj Rattaket said.

Mr Phongsak was charged with carrying a gun in a public area and drunk driving, Maj Rattaket said.