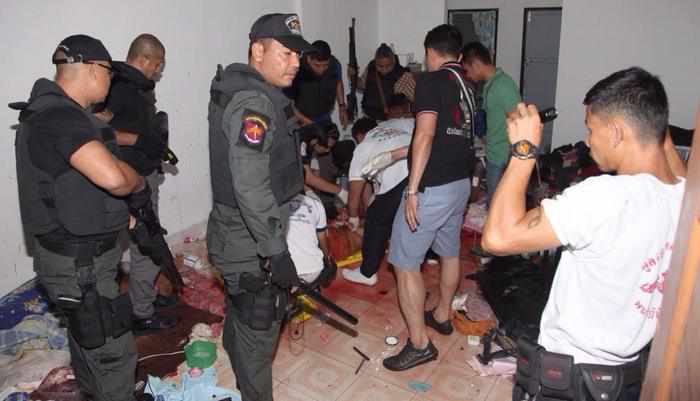 PHUKET: One man died, while a woman lay seriously injured in hospital last night following an attack by a drug-crazed man thought to be high on ya ice (crystal methamphetamine).

Phuket City Police were called to a dormitory on Santisuk Soi Mai Luan Road at 6:30pm, where they found the 25-year-old suspect, Niwat Sampoosri, locked in the room attempting to kill himself.

“Mr Niwat had attacked his 22-year-old girlfriend, Rarinya Putthawong, with a meat cleaver,” said Capt Pornthip Chumsri of the Phuket City Police. “A friend of the couple, Chalermpol Pasurawiroj, 25, tried to help Ms Rarinya. However, Mr Niwat attacked him with the cleaver too.”

Mr Chalermpol and Ms Rarinya managed to escape the room and were quickly transferred to Vachira Phuket Hospital with severe injuries after rescue workers arrived.

Mr Chalermpol, who suffered deep lacerations to his chest, was pronounced dead upon arrival by doctors. Ms Rarinya, a singer a the Pink Lady 2000 on Phang Nga Road, suffered wounds to her abdomen.

Following the pair’s escape, Mr Niwat locked himself in the room and attempted to commit suicide.

“He locked the door and was yelling and screaming. He then drank fabric softener and attempted to cut his own throat and wrists. After that, he tried to electrocute himself,” said Capt Pornthip.

Police spent more than an hour trying to coax Mr Niwat out of the room, but eventually resorted to breaking down the door.

“We stormed the room and overpowered Mr Niwat. He was then transferred to Vichaira Phuket Hospital by Kusoldham rescue workers,” Capt Pornthip said.

Mr Niwat is to be tested for ya ice and charged with murder and deadly assault with a weapon. Additional charges might also be brought, Capt Pornthip added.

According to 25-year-old Mannaya Junchaweng, the owner of the dormitory, Mr Niwat, Mr Chalermpol and Ms Rarinya had been smoking ya ice in the room at the time of the incident.

“All three were smoking ya ice in the room. Mr Niwat and Ms Rarinya then started to fight, so I ran to ask a neighbor for help,” Ms Mannaya said.