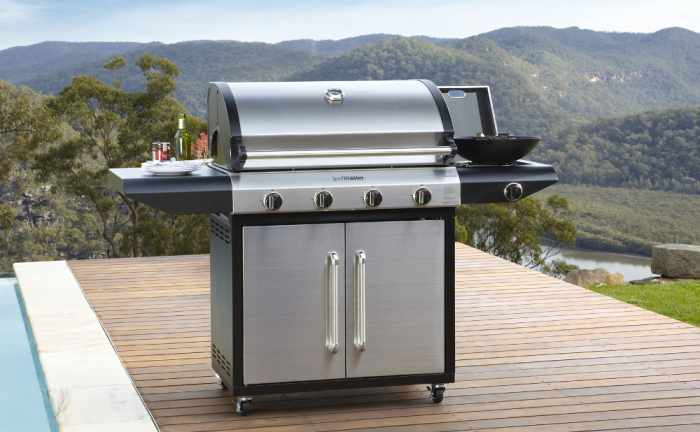 PHUKET: In Thailand you’re never far from a barbecue. A massive chunk of the ever-present street food is based on grilling different kinds of meat over an open fire. Still, Brad McElroy felt he wanted a barbecue of his own and decided to import one from his home country, the motherland of barbecue – Australia. That was 18 years ago and what started as a personal affair, grew into a full-time business that goes by the name of The Barbecue Store.

“I’m Australian and barbecue is a major part of our lifestyle, but when I was living in Bangkok I couldn’t find a proper barbecue,” explains Brad when asked about the origins of his business. “I decided to import one from Australia and then I thought it’s better to take two, because I knew that as soon as I get one, one of my friends is going to want one too. Even before they arrived, the second one was already given away.”

his Sukhumvit apartment. Eighteen years later the Barbecue Store employs 20 people and has outlets in Koh Samui, Chiang Mai, Pattaya, Hua Hin and, of course, Phuket, where the company has been present for 17 years.

“The Phuket market is a bit seasonal, much more so than Bangkok, but it’s been growing steadily by 15 to 20 per cent a year. It’s a good market for us because there is a big number of expatriates living here as well as many expats living in Hong Kong, Singapore etcetera, who have property here and come visit a few times a year,” explains Brad.

In the beginning, it was mostly foreigners that The Barbecue Store catered to, but these days Brad estimates that up to 50 per cent of his customers are Thai. However, that is not the only change. One of the improvements to the lives of importers in Thailand is digitization – thanks to computerized systems, what used to be a week-long process of clearing a shipment of cargo to Thailand can now be done in less than two days. Almost two decades in business has allowed Brad to observe many such changes and improvements, but one thing hasn’t changed whatsoever – his love for barbecue food. He still grills five times a week, sometimes even at breakfast.

“There is no shortage of local barbecue culture in Thailand; the street vendors use barbecues, and some people choose to have their food prepared by them, but others want to have their own barbecue. The ones that we sell are quite different from the small, clay pots with a grill on top you might see on the street,” says Brad.

And indeed they are. The company has over 40 models of barbecue on offer with the smallest, portable grills starting at 2,500 baht and the most advanced, outdoor kitchens costing as much as 260,000 baht for a unit composed of a stainless steel grill, a refrigerator, stainless steel sink and more. But whatever the price or size, Brad guarantees high-quality – thanks to an ongoing relationship with Australia’s leading retailer of barbecues, Barbecues Galore.

“When I import barbecues I select the right ones for Thailand, ones with high quality and that you won’t have any issues with. That comes at a little bit of a price, but you get what you pay for, and you can be sure of many, many years of barbecuing with it.”

And if something does go wrong, the Barbecue Store offers a range of spare parts and a barbecue repair service.

Barbecuing is all about having a relaxing time with your family and the Barbecue Store makes shopping easier thanks to their website: barbecuethai.com. The page provides complete information and pictures, and a grill purchased online gets delivered to the customer’s door. “Around 20 per cent of our sales are generated online,” says Brad.

But it’s in the shop where you’ll meet the staff, who are very proud of being professional and passionate about their products. Not only will they give you information about your barbecue maintenance, but they will happily share their knowledge of grilling techniques for different kinds of meat and maybe, most importantly, make the whole affair more personal. After all, barbecue does today what bonfires used to do for our ancestors – they bring people together.

Hotels and shops plead for end to martial law