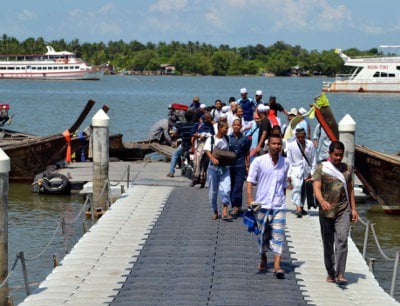 PHUKET: More than 200 youths escaped from the drug rehabilitation center at Por Noh Klong Gom School and sought the protection of a local mosque in Krabi on Thursday after one of their classmates was allegedly beaten to death by teaching assistants.

The school, although in Krabi, serves as a drug rehabilitation center for about 800 troubled youths from throughout Southern Thailand, most from the border provinces of Pattani, Narathiwat and Yala.

Bamrung Ginglek, brother of School Director Anurak Ginglek, confirmed that one student at the facility had died, and the boy’s body had already been sent back to his family in Yala.

Krabi District Chief Administrative Officer Sopon Suwankharat along with Krabi Police led by Lt Col Prasit Yodthong and more than 20 Territorial Defense Volunteers were dispatched to Baan Koh Klang Mosque, about two kilometers from the school, to investigate the incident.

The recently escaped youths explained to the officers that they had run away from the rehabilitation center because some of the teaching assistants there had viciously beaten two of the four students who attempted to escape on July 23.

Of the four students, two successfully evaded capture, while the other two were caught and allegedly beaten. One student, Abdulalima Ha, 20, is now being treated at a hospital in Krabi Town.

The other, Maha Manitayae,20, died from his injuries.

“We didn’t know about the death until after the body had been sent back to the student’s family in Yala. We now have to contact the relatives to get permission to exhume the body and perform an autopsy to determine the cause of death,” said Krabi Provincial Police Deputy Commander Boontawee Toraksa.

“This will be very difficult, because doing such a thing is against their religious beliefs,” said Col Boontawee.

Krabi Provincial Police plan to question all five teaching assistants accused of carrying out the beating. In addition, police are investigating whether or not the school director hid evidence about the incident, and in doing so obstructed justice.

“After an interview with Mr Abdulalima, we confirmed that there were at least five people who beat the two youths. We also learned that the incident was not reported to the police, which means the school director may be guilty of attempting to conceal this serious offense,” said Col Boontawee.

Mr Bamrung, who arrived at the school to take care of his brother, explained that the teaching assistants had chased down the escaped students. A fight then ensued, which resulted in the death of Mr Maha.

Police officers were told by youths at the school that many of them wanted to leave because they were afraid of being hurt like “their friends”. However, teaching assistants had prevented them from leaving.

“If they do not wish to be at the school, we will contact their parents, so that they can pick them up. We will transfer the students to Baan Koh Klang Mosque, where they can stay until their parents arrive to take them home,” explained Krabi District Chief Administrative Officer Sopon.

The students said that if the violence ceased, they would like to stay at the school.

The Por Noh Klong Gom School has about 500 local students enrolled in the regular curriculum and about 800 troubled youths, most from the Deep South, enrolled in the drug rehab program. The anti-drug program has been funded with more than one million baht from the Office of the Narcotics Control Board.