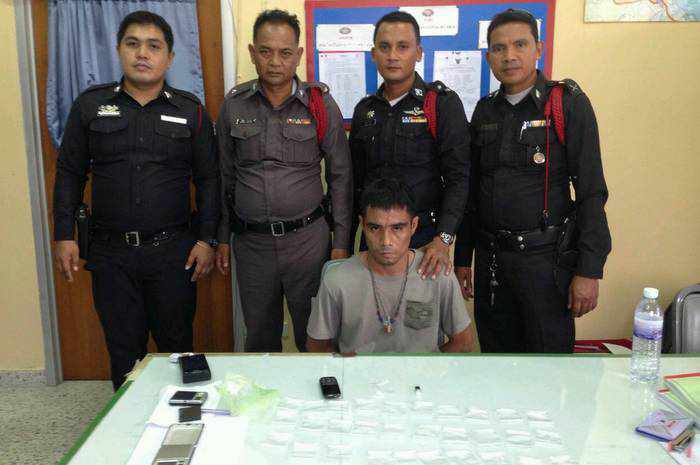 PHUKET: A drug dealer who had recently been released from a six-year stint in prison was arrested in Phuket yesterday in possession of 105,000 baht of ya ice (crystal methamphetamine).

Jakkarin Songpet, 33, was stopped by Thalang Police at the Baan Bang Jo checkpoint on Thepkrasattri Road at about 5:30pm.

“We pulled him over because he was driving a motorbike without a license plate and acting suspicious,” said Lt Suchart Leucha of the Thalang Police.

Police took Mr Jakkarin to the Thalang Police Station, where he confessed to selling drugs to teenagers in Patong.

“Mr Jakkarin told us he had been released from prison three months ago after serving a six-year sentence in Pattalung for selling methamphetamine,” said Lt Suchart.

“After his term, he got a job as a security guard in Patong and began selling drugs to teenagers there. The drugs had been bought and transported from Pattalung.”

Mr Jakkarin was charged with possession of a Category 1 drug with intent to sell.