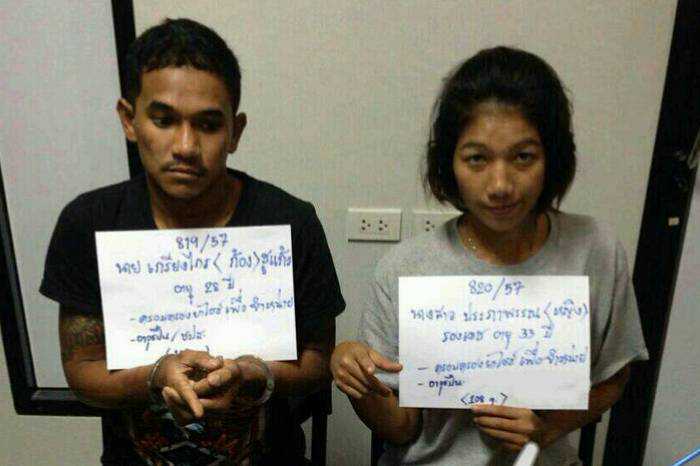 PHUKET: A drug dealer pulled a gun on a group of Phuket police officers as they moved in to make an arrest at a Srisoonthorn community housing project today.

“When officers presented themselves to 28-year-old Kriengkrai Chookeaw, he attempted to fight back and pulled out a gun,” said Lt Col Jarun Bangprasert of the Phuket Provincial Police.

After a short struggle, police were able to detain Mr Kriengkrai and seize his illegally owned .38 gun and two rounds of ammunition.

“The suspect and a few officers sustained minor injuries during the fight. After we subdued Mr Kriengkrai, we had him take us to his room so we could carry out our search,” Col Jarun said.

Inside the room, police found Mr Kriengkrai’s 33-year-old girlfriend, Prapaporn Rongdej, two bags of ya ice (crystal methamphetamine) and a book with a list of customers’ names.

The couple then led the officers to a water-pump room, where 51 more bags of ya ice and digital scales were hidden inside an electrical control box.

“We seized a total of 108.14 grams of ya ice, as well as the gun and rounds of ammunition,” said Col Jarun.

Both suspects confessed to selling drugs and were taken to the Thalang Police Station for further questioning.