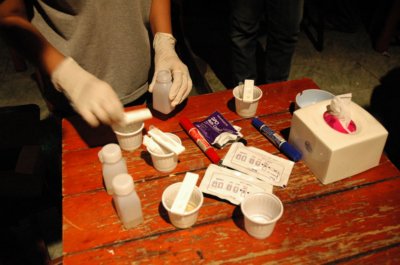 Kathu Police Inspector Nikorn Chootong told the Gazette that the crackdown was ordered by the Royal Thai Police following a reported increase in the use of ya bah (methamphetamine).

The inspection teams, of about 10 persons each, included district officials and female workers from the local public health office who took urine samples from everyone on the premises at each location and tested them for amphetamine use.

Three patrons of the Khon Lang Chang pub, on the road to Karon, tested positive when their urine turned the telltale purple.

The inspectors also checked for weapons and inspected identification cards to ensure no minors were present.