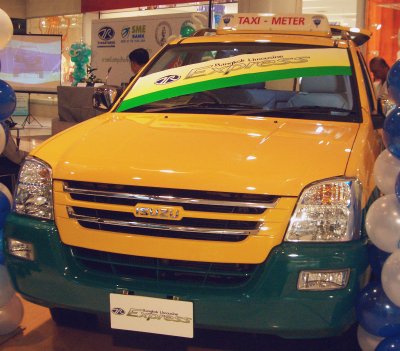 PHUKET: In an attempt to improve public transport on the island, Governor Udomsak Usawarangkura has announced his support for a new project aimed at putting hundreds of metered taxis on Phuket roads and launching an Airport Bus service.

On April 1, the Governor presided over the launch of the “Taxi Phuket Development Project” at Central Festival, during which he also announced the introduction of a new 52-baht minibus service between Phuket City and the airport.

The 30-seat minibus, to go into service in about three months’ time, will stop at four locations: Surakul Stadium on Wichit-Songkram Road; Tesco-Lotus; the Heroines’ Monument and Pranangsang Temple on Thepkrasattri Rd, in Thalang.

The new taxis are station wagons with seating for seven and more luggage room than the standard metered taxis. Built by Bangkok-based car manufacturer Thairung Union Car (TUC), the “Thai Rung Bangkok Limousine Express” vehicles have Isuzu 3,000cc engines and are available for purchase at 920,000 baht on a low-interest instalment plan through the Small and Medium Enterprise Development Bank (SME Bank).

Prospective buyers can set themselves up as taxi drivers for a down payment of 229,000 baht, paying off the balance over a five-year period at just 5% interest. No collateral is required, though buyers must have a personal guarantor.

Theerayuth Prasertphol, Chief of the Phuket Provincial Transportation Office (PPTO), told the Gazette today that the taxi fare will be 50 baht for the first two kilometers, then 7 baht per kilometer thereafter.

While this is more expensive than metered taxi fares in Bangkok, the 20km trip between Patong and Phuket City, for example, would cost 176 baht – about half what most tuk-tuks currently demand for the same journey.

K. Theerayuth added that the metered-taxi registration process takes one day and costs less than 2,000 baht.

At the launch, Gov Udomsak said he would like to see public transport in Phuket improve and provide more options for tourists.

“Currently we have only about 20 metered taxis. I would like eventually to see all black-plate [illegal] taxis become registered. We also want to add more metered taxis,” he said.

While admitting that competition for passengers between limousine and metered taxi drivers at the airport was still a problem, he said that officials would be fair in mediating any disputes that arose from the introduction of new taxis.

“Some metered taxis in Phuket are still barred from picking up passengers at certain hotels. We would like them to be able to collect fares from anywhere on the island. It’s a necessary thing that we must do,” he said, adding that he was willing to take on “influential figures” to make it so.

Gov Udomsak encouraged Patong tuk-tuk drivers whose vehicles were damaged by the the tsunami to switch over to metered taxis, and also encouraged black-plate taxi drivers to take advantage of the SME loans and operate legally.

Virat Kulsri, Assistant Managing Director of TUC, said that more than 100 people in Phuket had already expressed interest in buying and operating the new taxis, three of which are already in service in Chiang Mai.

“I think this model is appropriate for Phuket because it can seat more passengers and luggage. The cars are efficient and safe. They run on diesel, getting about 16km per liter, and all seats are equipped with safety belts.