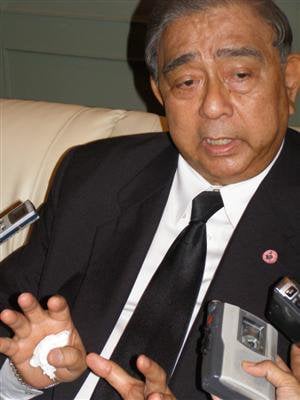 Forty-eight-year-old Somchai Sriplienjan was driving Dr Smith’s blue Mazda BT50 pickup during heavy rain along Route 527 in Pakjun District, Ranong, when he lost control of the vehicle on a curve.

The pickup came to rest when it hit a tree about five meters below the road surface. The vehicle was wrecked by the impact and all of its windows were shattered.

Both men were rushed to Thonburi Chumphon Hospital in neighboring Chumphon Province.

Doctors there said Dr Smith suffered swelling to the back of his head and a cut to his left eyebrow, which required six stitches.

He complained of a headache, they added.

Dr Smith was taken by helicopter to Siriraj Hospital in Bangkok this morning, where a brain scan revealed signs of blood-clotting deep inside his brain.

No prognosis was made available and staff at the NDWC were unable to provide further information.

However, one officer at the hospital described media reports about Dr Smith’s condition as “inaccurate”.

K. Somchai, who required four stitches to his left eyebrow, told a reporter for Kom Chad Luek that he had been driving carefully at the time of the accident.

Straight-talking Dr Smith, 72, is a former head of the Thai Meteorological Department.

He is now famous for a series of letters written to senior government officials between 1993 and 1999, urging them to prepare for a tsunami – something he deemed imminent at the time.

After the disaster, he was put in charge of the newly-formed NDWC by former Prime Minister Thaksin Shinawatra.