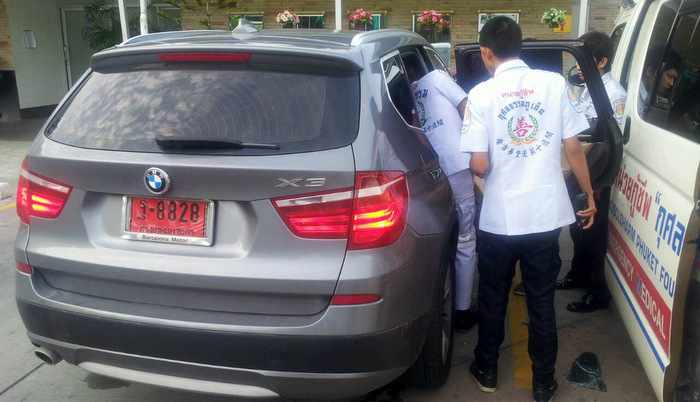 PHUKET: Rescue workers safely averted a potential disaster early yesterday morning when they recovered a two-year-old boy from a locked BMW that was still running while parked at a Phuket gas station.

Manus Chailiem, the boy’s grandfather, alerted Kusoldharm Foundation rescue workers to the danger at 6:30am.

Mr Manus, his daughter and Nong Phi, age 2, were en route to Nakhon Sri Thammarat to visit a relative, a soldier who was recently posted to the Deep South, when he parked at the Shell gas station near Wat Pra Thong in Thalang so he could use the toilet.

“When he returned, his daughter was no longer in the car and all the doors were locked,” rescue worker Sakul Nabnien explained to the Phuket Gazette.

After about seven minutes of trying to open the doors, the rescue workers decided to take action and smashed the glass quarter-panel on a rear passenger door of the brand new BMW X3, which was still fitted with red dealer license plates.

“Please do not leave children alone in a car. They can die if they’re locked in cars that are still running,” rescue worker Sakul told the Gazette.

“And it’s especially dangerous at gas stations, where an accident could endanger many other people’s lives.”

Nong Phi’s mother declined to explain why she left him alone in the vehicle.