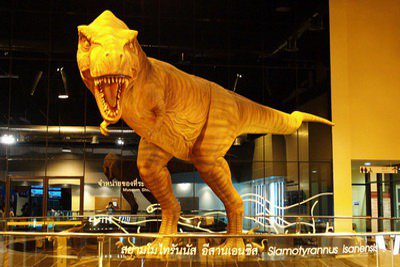 PHUKET: Dinosaurs are taking a holiday in Phuket, along with all the other old bones on the island, in a travelling museum exhibition open from August 28 to September 16.

The free-entry exhibition, with information in Thai and English about paleontological and geological discoveries in Thailand, will be open daily at the Phuket Marine Biological Center (PMBC) between 8:30am and 4:30pm.

“Our aim is to educate the public about the fossil history and geology of Thailand. In making this exhibition possible, we have worked in cooperation with the Sirindhorn Museum in Kalasin in order to promote the advancement of education in science,” said PMBC director Pinsak Suraswadi.

All the replica fossils to go on display are of fossils found in Thailand, he added.

Among the displays, including life-sized replicas of the skeletons of three dinosaurs, will be a reconstructed Siamotyrannus Isanensis, a carnivorous ancestor of the notorious Tyrannosaurus Rex, standing three meters tall and 12m long from head to tail.

Two other dinosaur skeletons to be on display are the Phuwiangosaurus Sirindhornae, which stands 20m long and five meters tall, and the Isanosaurus Attavipachi, which is the oldest herbivorous dinosaur in the world.

In addition to the dinosaurs, a dinosaur egg and footprint, as well as other fossil evidence will be on display.

The opening ceremony for the roofed event will be held at about 10:30am on August 28, explained PMBC adviser Wannakiat Thubthimsang.