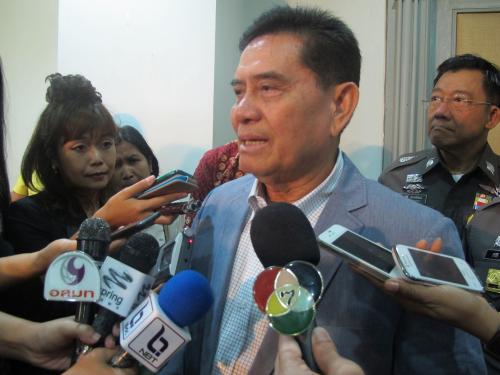 PHUKET: Deputy Prime Minister Pracha Promnok today called for every police station across Phuket to have a dedicated section to receive complaints from foreigners.

The call came at a meeting at The Metropole Hotel in Phuket Town attended by Phuket Governor Maitri Inthusut, Provincial Police Commander Choti Chavalviwat and other top-ranking police officers from the Andaman provinces of Phang Nga and Krabi as well as Surat Thani.

“The superintendent of every police station should set up ‘one-stop’ sections to serve tourists and expats. This will make it more convenient for people to file complaints and make it easier for officers in the police station to do their work,” Deputy PM Pracha said.

He also called for police on the island to work together with the governor to help boost public safety in Phuket.

“Police and officials should share information in order to be able to provide better safety and security in Phuket. Security is a top priority not just for Phuket, but for every province in Thailand in accordance with the policy laid down by the prime minister,” Deputy PM Pracha said.

Before the event got underway, Governor Maitri in his opening address pointed out that 232 foreigners representing 49 nationalities had been arrested over the past 10 months.

“Phuket is a small city, but there are many tourists and people from other provinces in Phuket. This makes the city more complex and we have some problems that still need to fixed,” he said.

Governor Maitri added that over the same period 102 foreigners had died in Phuket. He named the top causes of death as: health problems, accidents, drugs and drowning.

Phuket’s lifeguards received a special mention: “They saved 64 Thais and 577 foreigners from drowning [during the 10 months].”

“Phuket no longer has a low season. Over the past 10 months about 9.14 million passengers passed through Phuket Airport – that’s an increase of 1.48 million, or about 19%, compared with the same period during the preceding year,” he said.

The ever-increasing number of arrivals on the island was causing several key concerns, including traffic jams, problems with taxis, and public safety, he said.

“One of the major problems in Phuket is traffic jams. There are not enough roads in Phuket for the number of the cars here,” Governor Maitri suggested.

From January to July this year, an average of 1,754 new cars were registered in Phuket per month.

“This is an increase of 24% on the same period past year. The increasing number of cars is causing traffic jams and other problems for road users,” he said.

The ongoing problem with illegal taxis remained a concern.

“We have tried to fix the problem by encouraging them to legally register their vehicles as taxis. So far 40% of them have done so. The rest of them have difficulties because their cars are still owned by finance companies,” Gov Maitri said.

“Our officers work with many volunteers – Thai and foreign. In some police stations in tourist areas we have translators available to assist tourists,” Maj Gen Choti said.

“Also, additional officers will patrol areas where many tourists stay. We are continuing our efforts to have illegal taxi and jet-ski operators become legal, and so far we have 343 CCTV cameras around Phuket.