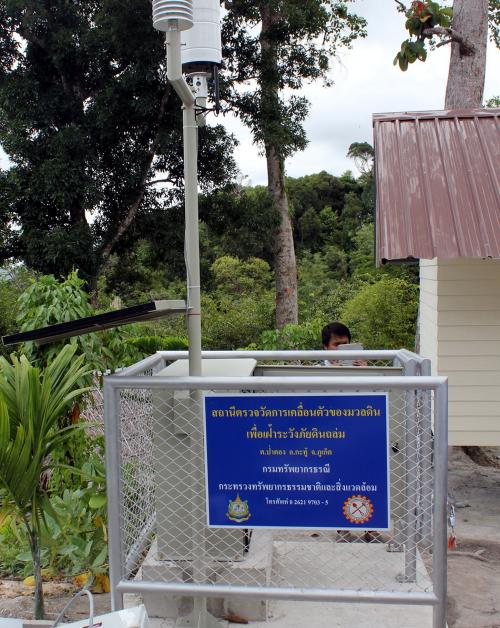 PHUKET: A landslide early-detection system costing 4-million-baht has been installed in the Patong Hills.

The system was installed in Phuket because of the high risk of landslides in Patong, Kathu and Karon, Thawan Sukkho of the Bureau of Geotechnology, Department of Mineral Resources, explained to Phuket Governor Maitri Inthusut during an inspection on Friday.

“The system is comprised of steel bars buried in the hillside and a control box on the surface. The system measures underground vibrations, movements in the soil and rainfall and groundwater levels to determine landslide risk,” Mr Thawan said.

“Usually landslides are triggered by rain of more than 100 millimeters. If this much rain falls, the device is able to use the data it collects to calculate how soon a landslide could take place, and it sends a warning to the Mineral Resources Department, indicating whether we should evacuate the area in 30 minutes or two hours,” Mr Thawan said.

“Whenever there is a danger of a landslide, we will report it to local government offices in the risk area so they can inform people there to evacuate. We will also post the information on our website,” Mr Thawan said.

In addition to warning of impending landslides, the devices will be collecting data that can be used to help understand landslides and thereby increase safety in the future, Mr Thawan said.