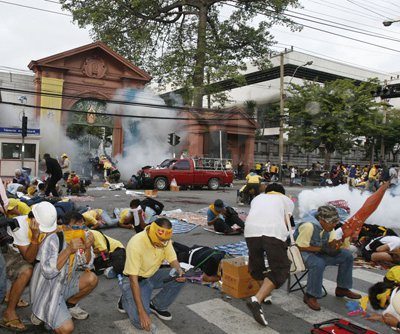 Gen Chavalit was deputy prime minister in charge of security. He is reported to have resigned in shame at the use of violence by the government of Prime Minister Somchai Wongsat, who just last week had offered to make peace with the protesters.

Police fired tear gas and used force to disperse the protesters who blocked and surrounded Parliament this morning.

The protesters wanted to prevent access to Parliament by MPs who were scheduled to attend a policy debate of the increasingly unpopular Somchai government. Following the debate, Somchai, who is the brother-in-law of disgraced prime minister Thaksin Shinawatra, had to climb a fence to escape from the compound.