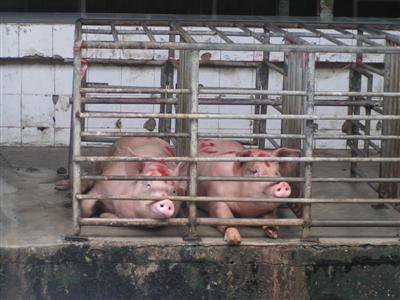 PHUKET CITY: Much has been written about high prices of vegetables during the Vegetarian Festival, especially with recent flooding in other parts of the country destroying crops.

But the 10-day period of vegetable-only consumption also had an impact on meat prices, especially in Phuket City, where the ethnic Chinese who make up the bulk of those taking part are typically enthusiastic consumers of a wide variety of meat products – including pork.

“Tek”, who runs pork vending stalls in five different markets (Samkong, Rawai, Koh Sireh Bridge and two in Patong) said his average daily revenue of 80,000 baht a day is typically reduced by about 30% during the festival.

Tuadaeng, another pork seller at a single stall in Samkong Market, estimated sales were down about 50% during the festival.

Jiraway, who sells chicken at the same market, said that sales were about the same as normal, with the number of rival vendors closing down compensating in large part for the reduced number of buyers.

The relative resiliency of chicken sales in Phuket City during the festival is likely related to the fact that the Muslim population, estimated at about 30% in Phuket, refrains from pork consumption year-round as a matter of religious belief. Few Muslims choose to take part in the Vegetarian Festival, which this year overlapped with the Ramadan period of fasting that ended on October 1.

In fact, one Muslim woman who sells “Muslim chicken” with sticky rice at a stall on Yaowarat Rd in Samkong said sales were better during the Vegetarian Festival than at any other time of the year due to the lack of competition.

The festival also reduces processing rates at local slaughterhouses, of which there are 19 on the island.

Prasit, a 12-year-veteran of the pig slaughtering industry, currently employed at the Phuket City Municipal Slaughterhouse, leads a team of a team of 10 Thai and Burmese butchers.

Mr Prasit and his team normally butcher about 80 swine per day, but the figure dips to about 25 per day during the festival due to a drop in demand.

Mr Prasit earns 100 baht per pig processed. However, he said he must use the proceeds to pay all of his staff.