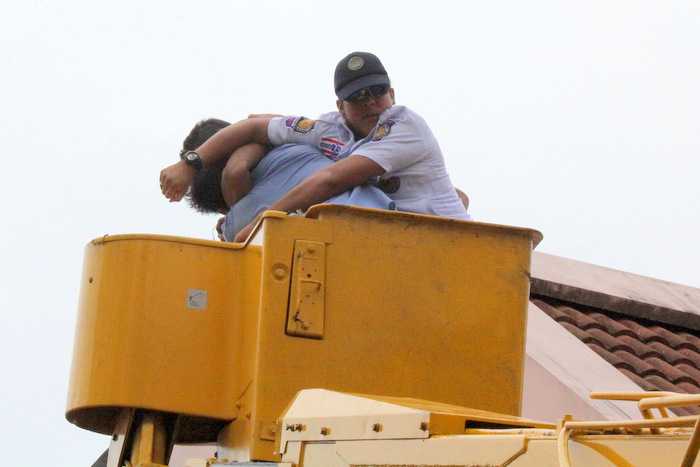 PHUKET: Rescue workers recovered a highly-stressed lawyer from a rooftop in Phuket Town yesterday by grabbing him and pulling him into a cherry picker.

“The man was under a lot of pressure about work,” said Lt Wetchasak Juladung of the Phuket City Police.

The lawyer climbed onto a third-floor terrace of the building where his friend lives in Soi Suthat 1 soon after midday, after relating to his friend how much pressure he was under from a case he was working on.

“He jumped down onto the roof of the house next door. In doing so he cut his lips and was bleeding,” Lt Wetchasak told the Phuket Gazette.

The friend kept the lawyer talking while a neighbor called police. Soon a crowd had gathered, calling for the lawyer not to jump.

“When we arrived, the man was sitting on the roof, crying,” said rescue worker Virat Rodpan. “We kept talking to him while we waited for a cherry picker from the Phuket City Municipality to arrive.”

When rescue workers noticed that the man had tired, they quickly activated the cherry picker to recover him.

“We kept talking with him while we got closer. When we close enough, we grabbed him tight and pulled him into the cherry picker,” said Mr Virat.

The man was taken to Vachira Phuket Hospital, where he received treatment for his cut lips and remains under observation for depression, confirmed Lt Wetchasak.