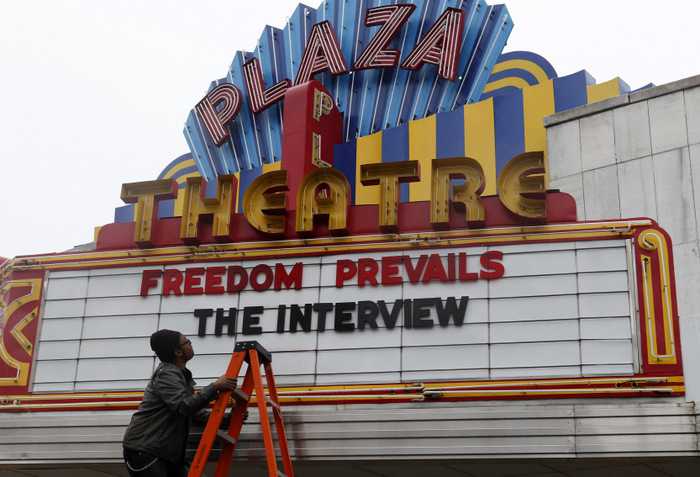 PHUKET: Sony Pictures will allow “The Interview” to play in more than 200 U.S. theaters as of Christmas Day, reversing its decision to pull the film, after coming under criticism from President Barack Obama and others for caving into pressure from North Korea.

The White House praised Sony’s about-face, which the studio said would result in “a limited theatrical release” of the film, which stars Seth Rogen and James Franco and is about a fictional plot to assassinate North Korea leader Kim Jong Un.

“The decision made by Sony and participating theaters allows people to make their own choices about the film, and we welcome that outcome,” presidential spokesman Eric Schultz said in a statement.

It was another surprising twist in a saga that started four weeks ago, when a massive cyberattack now blamed on North Korea crippled the Hollywood studio. The hacking has grown into a geopolitical headache and a global symbol of attacks on free expression.

On Friday, Obama had called Sony’s decision to pull the $44 million movie a mistake, suggesting it could set a precedent in which “some dictator some place can start imposing censorship here in the United States.”

Congressional Republicans and Democrats, as well as Hollywood luminaries such as George Clooney, had also assailed the canceled release, with some accusing the studio of self-censorship.

Franco and Rogen, who also co-directed the film, broke their silence after Sony made the announcement.

“The people have spoken! Freedom has prevailed!” Rogen said, while Franco added, “VICTORY!!!!!!! The PEOPLE and THE PRESIDENT have spoken!!!”

Sony Pictures Entertainment Chief Executive Michael Lynton said the studio was looking for more options to screen the film, which major U.S. theater chains pulled because of threats from hackers who warned of a September 11, 2001 style of attack.

Lynton said in Tuesday’s statement: “We have never given up on releasing ‘The Interview’ and we’re excited our movie will be in a number of theaters on Christmas Day.” He said the studio, a unit of Sony Corp, was trying to secure other platforms and more theaters “so that this movie reaches the largest possible audience.”

One of the first signs of a breakthrough for Sony came in a tweet from Tim League, founder of the Texas-based Alamo Drafthouse Cinema chain, saying it planned to show the movie. Tickets sold out for many of the screenings within minutes of being offered online.

Most of the 200 or so theaters are believed to be independent exhibitors and some said they would take some extra security precautions for the first screenings. The major movie chains that had bowed out last week, such as AMC Theatres and Regal Cinemas, had not yet addressed the reversal.

“I think everybody has been doing a certain amount of this on the fly,” said Jan Klingelhofer, a film buyer from Oakland, California, who got the movie into at least two theaters.

Legal experts said theater owners, not Sony, would bear the brunt of legal liability in the event of violence at the shows.

In one case that has similar themes, victims of the 2012 mass shooting at a movie theater in Aurora, Colorado, brought a case against the theater owner Cinemark USA. In August, the judge overseeing the case refused to dismiss the lawsuit and allowed it to move forward.

Even so, Eugene Volokh, a professor at the University of California, Los Angeles School of Law, said movie theaters would have “a pretty strong defense” in such a case because, although there is a general threat concerning “The Interview”, it is not specific or foreseeable.

Theater owners and film buyers told Reuters that Sony shared its plans to have the movie play on video-on-demand (VOD) beginning on Dec. 25. Sony has not confirmed the VOD plan.

As of yet, however, no major U.S. cable or satellite operator has plans to offer the film to their subscribers.

A national security official said U.S. authorities did not rate the threats by hackers against theatergoers seriously, but it was not yet clear whether U.S. agencies would issue any additional warnings of possible attacks on exhibitors.

North Korea experienced Internet problems during the weekend and a complete outage of nearly nine hours before links were largely restored on Tuesday; U.S. officials said Washington was not involved.

Links were restored at 0146 GMT on Tuesday, but two brief outages occurred later in the day, said U.S.-based Dyn Research, a company that monitors Internet infrastructure.

Matthew Prince, CEO of U.S.-based CloudFlare, which protects websites from web-based attacks, said the fact that North Korea’s Internet was back up “is pretty good evidence that the outage wasn’t caused by a state-sponsored attack; otherwise it’d likely still be down for the count.”

South Korea, which remains technically at war with North Korea, said meanwhile it could not rule out involvement by its neighbor in a cyberattack on its nuclear power plant operator involving non-critical data. ID:nL3N0U71AX]

North Korea has denied it was behind the cyberattack on Sony and has vowed to hit back against any U.S. retaliation, threatening the White House and the Pentagon.

Some of the internal emails leaked by the hackers who attacked Sony suggest it is considering a sale of its Sony/ATV Music Publishing unit, the Wall Street Journal reported