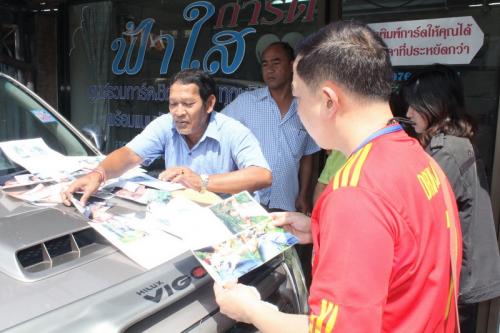 PHUKET: Officers from the Department of Special Investigation (DSI) yesterday returned to the scene of the fatal shooting by police of a thief on the run in Phuket Town in 2009.

Thaweewat Surasit, regional director of the DSI’s Bureau of Special Crime, led a team of officers to Rama IX Park, also known as Suan Luang, on Chao Fa Road to retrace the last steps of the slain man, Ongard Rordpradit, 32.

Mr Ongard was shot dead by police after he resisted arrest by allegedly opening fire on police officers in pursuit of him. He was fleeing the officers after he tried to sell a Buddha image that was reportedly stolen in an armed robbery hours earlier.

“We have come to inspect the area and collect all information about the case before we proceed with our investigation,” Mr Thaweewat said.

Mr Ongard’s father and relatives filed a complaint to the DSI immediately after the shooting four years ago.

“They do not believe Mr Ongard fought police as they tried to arrest him,” Mr Thaweewat said.

Recounting the events that led to Mr Ongard’s death, Mr Thaweewat explained that on November 23, 2009 police responded to a call from a store near Suan Luang.

The store owner reported that two men had tried to sell a Buddha image that matched the description of one stolen earlier that day from a shop on Bangkok Road.

Police arrived at the scene and arrested the second man, but Mr Ongard fled into the park, Mr Thaweewat explained.

The officers in pursuit reported that Mr Ongard opened fire on them, Col Siang Kaewthong of the Phuket Provincial Police told the Phuket Gazette.

According to police photos taken at the scene in 2009, Mr Ongard was found in possession of a revolver and at least five bullets.

“There are many things that were odd about my son’s death,” Mr Ongard’s father, Wichit Rordpradit, told the Phuket Gazette.

“The gun was apparently found in the palm of my son’s hand and he was found face up. My son was not clutching the gun, so for him to have been shot and fallen to land face up, the gun should have fallen somewhere. It should not have still been in his hand.

In his original complaint to the DSI, Mr Wichit said police called him to inform him that his son had been arrested on suspicion of stealing a Buddha image.

“At that time, Mr Wichit did not know his son had been shot dead,” Mr Thaweewat said.

There were also some other oddities that prompted the family to file a complaint to the DSI. When collecting the body, Mr Ongard’s mother and sister noted that he was not wearing a shirt, revealing that his body was covered in bruises.

The father also claimed that police returned Mr Ongard’s mobile phone to them, but the SIM card had been removed.

“Police told Mr Ongard’s mother that the shirt was being held as evidence and that they had no idea where the SIM card was,” Mr Thaweewat said.

“Now police cannot provide the shirt to hand over to the DSI for their investigation,” Mr Wichit added.

The DSI finally agreed to investigate the case after the court last year ruled that it was unsatisfied with the evidence provided by police in justifying the killing of the suspect.

“There is something odd about this case,” Mr Thaweewat said.

After the DSI team has concluded its inspection of the scene, collected evidence and completed their case notes, the officers will return to Bangkok to consider the next course of action in the investigation, Mr Thaweewat added.