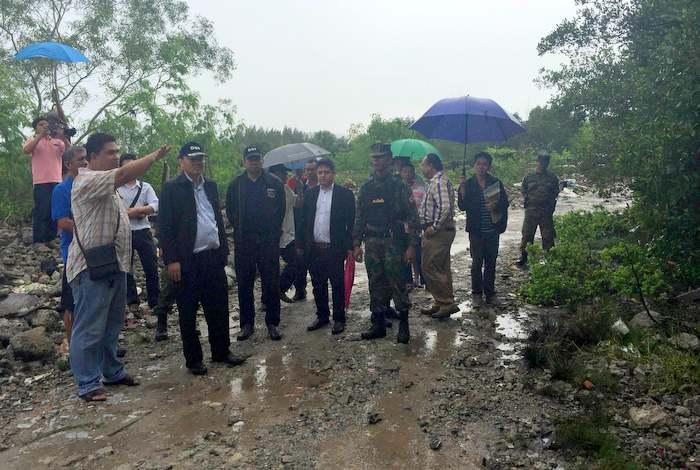 PHUKET: Officers from the Department of Special Investigations (DSI) on Friday surveyed and collected information on two plots of land suspected to overlap the mangrove forest at Baan Kuku.

The DSI team was joined by officers from the Navy and Rassada Municipality.

“Locals claim that the land in Baan Kuku Moo 3 is public land, dating as far back as anyone can remember,” said Lt Col Prawut Wongseenin, director of the DSI’s Bureau of Consumer Protection and Environmental Crime.

There are two plots of disputed land in Bang Chi Lao. One with a chanote. The other nearby, which has a SorKor 1 in the process of becoming a Chanote.

“A private company came in and cleared out the mangrove, claiming ownership of the land,” Col Prawut said. “After that, we’ve seen locals turning out to protest the clearance.”

The DSI reportedly first received locals’ complaints in 2008. A preliminary investigation at that time found the Chanote covered about 21 rai, with the SorKor 1 encompassing a nearby 29 rai.

“Based on aerial photographic analysis, we’ve found that the land was within a mangrove forest,” Mr Prawut said. “We’ve already sent a letter to the Land Department to revoke the private company’s ownership, and to cancel the SorKor 1 to Chanote upgrade request.”

The Land Department reportedly canceled the SorKor 1 upgrade, but did not revoke the Chanote. Locals continued fighting the development of the land by filing a lawsuit.

The court is yet to pass a judgment on the case.

“As the issue is in the court’s hands, we cannot intervene,” Mr Prawut said. “However, our analysis and survey will help bring more evidence for the court’s decision. We will not abandon the locals, and will keep finding and submitting more evidence. We will also submit a letter to the court to help boost the locals’ case.”