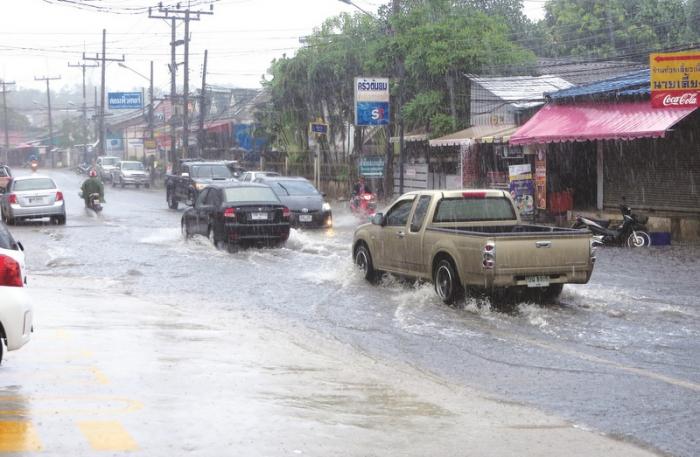 PHUKET: With the return of the rains last week, Phuket’s perennial road-flooding problems also made a dramatic comeback. But not on one stretch of highway that has been blighted for over a decade by impassably deep puddles.

The junction by the TOT’s main office on Chao Fa West was transformed into a no-go lake with every heavy tropical downpour – growing deeper and deeper with each passing year.

The freak storm in February brought both north- and south-bound traffic on the road to a virtual standstill at this spot, until pumps could be brought in to offer some relief.

About a week after that flood, work began on the installation of some very serious storm drains. As anyone who had to travel that route over the past few months will tell you, the roadworks for the storm drains caused holdups almost as heavy as any of the storms.

However, job done and just in time. As the traffic lights were swung back into place last week, the heavens opened and put the engineers’ work to the test.

The section of the Nakkerd Hills running parallel to Chao Fa West at that junction funnel the rain into a series of lakes – with nature intending that the excess from the major monsoonal deluges soak into the flood plains at the base of those hills and the buffalo fields across the other side of Chao Fa West.

Of course, we all know what happened to those plains and fields. Years of untrammeled development have wrought their end and the floods are nature’s revenge for stomping all over her perfectly planned ecosystem.

The installation of the storm drains at TOT have put paid to that one particularly impassable puddle, but really who has benefited? Certainly not the commuters, as sections of Chao Fa West further to the south are as equally prone to washouts and – as we all learned during the last week’s deluge – significant floods are now occurring just north of Kajonkietsuksa School because of excessive commercial and residential development.

Phuket companies just love to jump up and down about their CSR commitments, but surely corporate social responsibility should begin even before the foundations are laid. Provisions for infrastructure such as storm drainage should be made before thousands of local commuters and holiday-makers are inconvenienced by this disregard for nature’s natural flow.