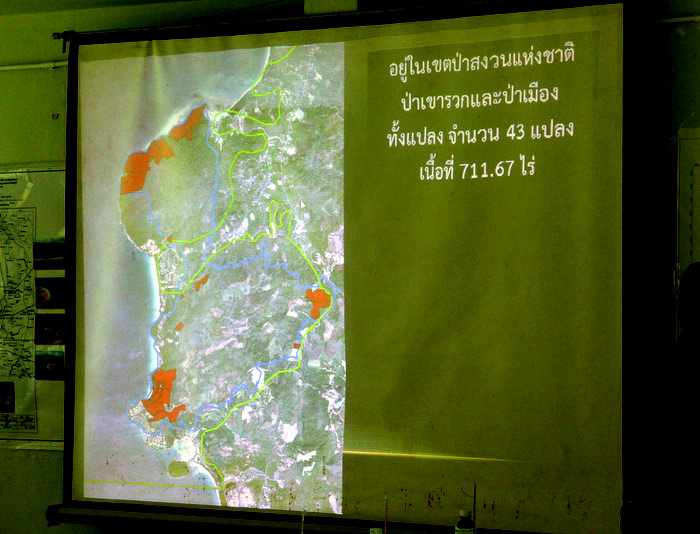 PHUKET: The new Director-General of the Department of Special Investigation (DSI) today announced that his officers will order the Land Office to hand over records and copies of land titles for plots along the border of – or allegedly in – Phuket’s Sirinath National Park.

“The DNP Director himself said he was having extreme difficulty in obtaining records from the Land Office,” Gen Chatchawal, a former deputy national police chief, told a press conference in Phuket this afternoon.

“They said that we do not have the authority to ask for any land records,” said DNP director Samak Donnapee, sitting right beside Gen Chatchawal at the conference.

“The public land register maintained by the Land Department by law is public record for any persons to see,” Gen Chatchawal noted.

Gen Chatchawal, who was ordered to replace Tarit Pengdith as DSI Director-General on June 27 following a direct order from the National Council for Peace and Order (NCPO), said that speed was of the essence.

“According to a report from the Sirinath National Park chief, some privately held plots still encroach on the park’s land. We have to work fast to get that land back before they build more on it,” he said.

Gen Chatchawal explained that the plots specifically targeted in the re-invigorated probe are 14 parcels of land that the DSI had previously agreed to investigate (stories here, here and here).

Gen Chatchawal expressed little sympathy for any people who paid for land that was within the park’s boundaries.

“Such people are unlucky if they bought land from a person who claimed the land was legal,” he said. “Even if they have been issued a land title, if the plot does not match the DSI map, they will have to give it back.”

To see the DSI’s Thai-language interactive online map marking all national parks and protected forests in the country, click here.

“Tourists don’t even know whether or not the hotel they are staying or any restaurants the dine at while in Phuket are illegal,” he said.

“If we shut down and pulled down illegal buildings from national park land, tourists will understand why we are doing it adn will see that laws are still being enforced in Thailand.”

One DSI officer, who asked not to be named, told the Phuket Gazette that the DSI probe into encroachment onto Sirinath National Park stalled because the DSI was ordered to not investigate the stolen park land.

“We personally would like to follow up the case as much as we can. However, in the past we received an order to stop our investigation,” the officer said.

“Now the political situation has changed, we can do the right thing and continue our investigation.”

World Cup: Neymar out of Cup as Brazil and Germany make semis