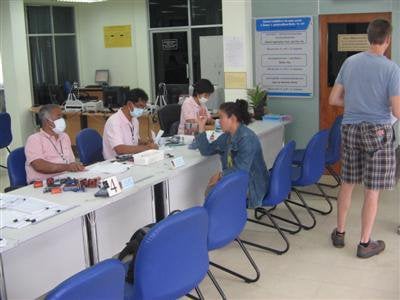 PHUKET: The Phuket Immigration chief says his office will contact the British Embassy regarding the background of a UK man reportedly convicted on child pornography charges in the UK, and now said to be planning to travel to Phuket to marry a Thai girl.

News that UK national Craig Meehan was planning a trip to Phuket was first reported by the UK’s News Of The World website.

Mr Meehan, 24, is reportedly living in a safe house in the UK to protect him from public anger over his presumed role in the kidnapping disappearance of his nine-year-old daughter, Shannon Matthews.

According to the report, Mr Meehan is now obsessed with a 24-year-old Thai he met online. The woman knows nothing of his past.

As he is now out on parole, British authorities are powerless to stop Mr Meehan from traveling abroad. His travel plans include marrying the woman in Thailand and eventually returning with her to the UK to live, it is reported.

Phuket Immigration Superintendent Col Panuwat Ruamrak was unaware of the story until contacted by the Phuket Gazette for comment.

Col Panuwat said he will contact the British embassy to investigate Mr Meehan through official police channels to see if there are any outstanding warrants on him or if his name is included in any UK or international blacklists.

The agency will also try to gather information about Mr Meehan’s travel plans and intended length of stay in Phuket, he said.

The decision on whether to allow him to enter the country at Phuket International Airport will only be made after a thorough review of the information obtained, he said.

Thai Immigration is free to deny entry to the country to anyone appearing at a border checkpoint, even if they are in possession of a valid visa and other travel documents.

Col Panuwat said there were currently no plans to find or inform the woman, who reportedly lives with twin four-year-old nieces.

Her picture was carried in the original report with her eyes digitally obscured with a black rectangle.