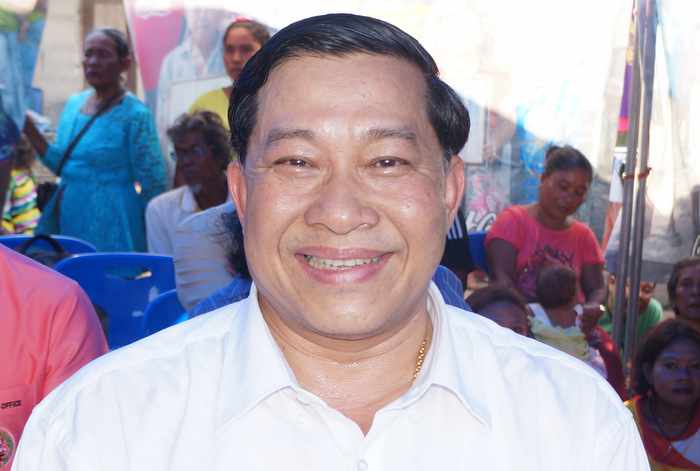 PHUKET: DNA tests on skeletal remains unearthed at the sea gypsy village in Rawai have confirmed that seafaring nomads have used Phuket’s southern beach to call home for more than 100 years.

“The bones were buried deep in the ground at least 60 years ago,” said Department of Special Investigation (DSI) Director Chatchawal Suksomjit.

The DNA from the bones matched that of Nim Luckkor, the 65-year-old man who lives in the house built over the site where the bones were found, he explained.

“This evidence supports the villagers’ claims that they have lived here for more than 100 years,” Gen Chatchawal said during a visit to the Rawai sea gypsy village late yesterday afternoon.

A team of DSI officers excavated the bones – parts of a skull, arm, leg and chest – from under the house in August last year (story here).

However, Mr Luckkor said yesterday that he had no idea whose bones they were.

“I have been living here for so long. I had no idea someone was buried under my house until officials discovered the bones last year,” he said.

The positive DNA match of the bones to a living sea gypsy resident in the village may help bolster the gypsies’ claim to have lived on the land for generations.

“More than 100 villagers have been sued for encroaching on private land,” said Gen Chatchawal.

“Nine families have been ordered by the court to move from their homes, but the case is under appeal and none have left the community.”

Gen Chatchawal explained to villagers that the DSI will do its utmost to provide evidence to support the villagers’ right to continue living at the village.

“We hope the court will consider the evidence and dismiss the private land claims,” he said. “But it is now up to the court, and we cannot interfere in its decision.”

Gen Chatchawal did not suggest an explanation for how private businessmen came to be issued land titles for plots inside the sea gypsy village now that the DSI’s investigation has proved that the villagers have lived at the site for more than a century.

However, just hours before his visit to the Rawai sea gypsy village yesterday, Gen Chatchawal announced that he will order the Land Office to hand over records and copies of land titles for plots along the border of – or allegedly in – Phuket’s Sirinath National Park (story here).

At that press conference, Department of National Parks, Wildlife and Plant Conservation (DNP) director Samak Donnapee accused the Land Office of blankly refusing to hand over public records to officers investigating private investors’ claims to land inside the park.

Many of those investors have also somehow been issued land titles for plots in question.

The sea gypsies in Rawai expressed deep gratitude to Gen Chatchawal for the DSI’s efforts on their behalf.

“I am so happy the DSI is helping us. I do not know what to say,” said community leader Ngeem Damrongkaset.

Nang Deeden, 75, said that his sister was one of the people being sued for encroaching on private land.

“I hope the evidence helps her in court,” he said. “But we are not going anywhere. We have been living here for 100 years.”

Yah Deeden, 72, expressed her thanks.

“I am very happy that the DSI is helping us. Without them we do not know what to do,” she said.

“We have lived here for many generations. We have nowhere else to go.”