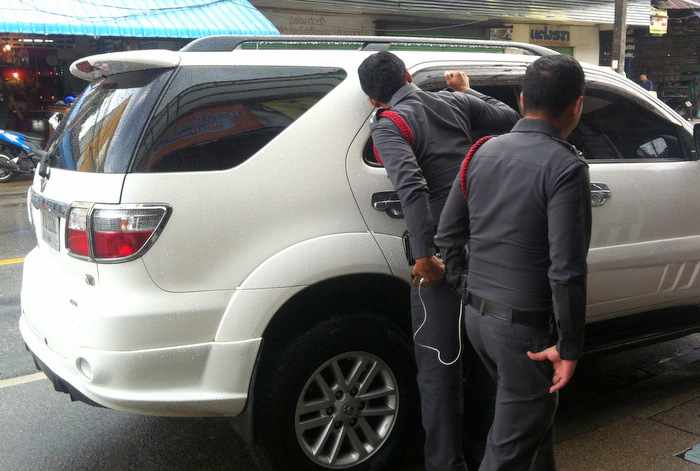 PHUKET: Police are trying to track down a thief who robbed a house in Pa Khlok while the home owner was asleep, then stole his car and dumped it on a quiet street in Phuket Old Town early this morning.

A resident on Bangkok Road notified Phuket City Police of an abandoned Toyota Fortuner parked in front of his house at 8:30am.

The rear-right window was open, but there was no trace of the driver.

“The vehicle looked as if it had been ransacked,” said Lt Col Rattaket Munmuang of the Phuket City Police.

Officers checked the vehicle’s registration and discovered that it belonged to Prasit Suwannarat, 47, a resident in Pa Khlok, in central Phuket.

Mr Prasit told the officers that he had reported his car stolen to Thalang Police early this morning, when he also reported that his house had been robbed.

“I came home from work at about 6pm yesterday. I parked the car in front of my house, in Udomsuk Housing Estate, and dropped the car key on the sofa,” Mr Prasit said.

“I went to sleep at about 9pm, but when my wife got home at about midnight, she woke me to point out that our house had been robbed and our car was missing.”

The living room had been turned over. The car key was missing, as was Mr Prasit’s piggy bank.

Called to recover his car this morning, Mr Prasit discovered that a gold necklace worth more than 60,000 baht, two rings valued at about 20,000 baht each and several hundred baht in coins were all missing from the vehicle.

“Forensic officers have dusted the car for fingerprints,” Lt Col Rattaket said. “Officers are also checking CCTV in the respective areas in the hope of identifying and locating the suspect.”