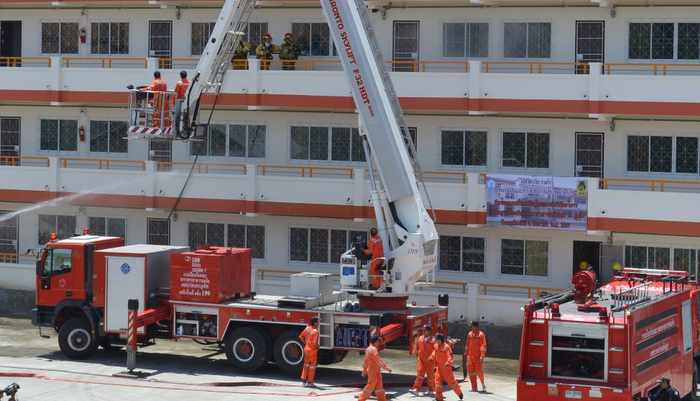 PHUKET: A full-scale fire drill was held today as the Phuket-based Department of Disaster Prevention and Mitigation office, Region 18 (DDPM-Region 18), prepared to prevent any further deadly blazes on the island.

“Though the fire drill must be carried out annually by law, we are really doing this to make sure that when the time comes, we are able to prevent tragedies like the one in Phuket Town last month,” Director of DDPM-Region 8 Trakul Thotham told the Phuket Gazette.

Last month, a family of three and one other woman died in a furniture shop fire that took firefighters about three hours to bring under control (story here).

“We need to learn from what happened there, and not let such a thing happen again,” Mr Trakul said.

The fire drill today simulated a blaze starting in a room on the third floor of an apartment building after an electrical device exploded.

Unable to put out the fire the residents called the DDPM-Region 18 for help.

“Residents first tried to put out the fire, but it got out of control. Firetrucks were then called in and we started to evacuate the building,” Mr Trakul said.

Nine “victims” were trapped by the flames.

“We used a cherrypicker to safely remove them from the building. Those injured from the fire and smoke were lowered down, along with an attendant, by rope,” said Mr Trakul.

“I am very happy with how today’s drill went.”