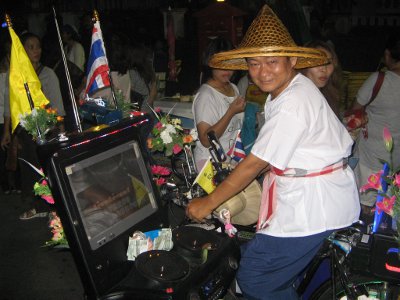 PHUKET: The 13th Old Phuket Town Festival was a big hit over the weekend, attracting droves of local residents and tourists to Queen Sirikit Park and all along Thalang Road.

This was followed by stage performances by students at Phuket City Municipality schools and exhibits including demonstrations of traditional Chinese paper folding, making of sweets and other cultural displays.

Scores of visitors posed for photos with a variety of colorful figures set up at the park: a serpentine dragon; a representation of Chi Sing Eia, god of fortune and wealth; a bamboo walkway covered with red lanterns and scores of decorated rickshaws.

Many ethnic Chinese lit joss sticks at an alter to the Bodhisattva Guan Yin and in front of the huge image of legendary sea dragon Hai Leng Ong next to the Tourism Authority of Thailand Phuket office.

On Thalang Road were a collection of classic Volkswagen vehicles and other antiques, as well as a Phuket Chino Village open-air wooden dance floor, where people paid 10 baht to dance with any of 10 “dancing girls” in 1950s garb, with the band Dok Euang playing classic ramwong (Thai folk music) tunes.

Scores of women, many of them students in Phuket Municipality schools, dressed in classic Chinese dresses or Peranakan (Straits Chinese) costumes.

The fun continues until the closing ceremony tonight, when a candlelight ceremony to pray for good fortune in front of the Hai Leng Ong golden dragon image at Queen Sirikit Park will start at 10:30pm.