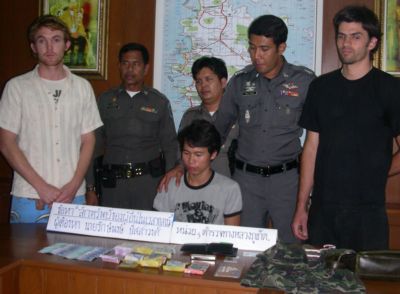 THALANG: The Phuket Highway Police have arrested a bus conductor for stealing the equivalent of more than 18,000 baht from a young Aussie on his way to Phuket from Surat Thani.

Both men told police they had been working as volunteers at childcare centers in Khon Kaen province and were on their way to catch a flight to Bangkok from Phuket International Airport at 6 pm.

When the bus at 2 pm pulled in to Thap Put Bus Station in Phang Nga for a 15-minute rest stop, Mr Radick went to buy some food and discovered that AUS$600 in his wallet was missing.

As he asked officers at the bus terminal for help in reporting the apparent theft, the conductor called the passengers back onto the bus, which promptly left the station – without the two young Aussies.

A Thai man, whose name was not given, helped the two men report their situation to the local police, who called the Phuket Highway Police.

When officers spotted the bus on Route 402 in Mai Khao, they pulled it over and searched driver Niran Homthong and the conductor Rakpong, who had joined the state-run interprovincial bus service just three months earlier.

Officers found some of the missing A$600 (18,350 baht) wedged into Rakpon’s sock and the remainder in his jacket pocket. They also found banknotes in a number of other currencies including Malaysian ringgitt, Vietnamese dong and Lao kip, officers said.

Rakpong confessed to the theft and was taken to Thalang Police Station where he was charged with daytime robbery, said police.

The two Aussies showed no anger at the Rakpong, telling the press that he might have been acting out of desperation.

No charges were filed against the driver.

Although Mr Wadick’s money was returned, the pair missed their return flight and had to spend the night at the Phuket Highway Police headquarters.