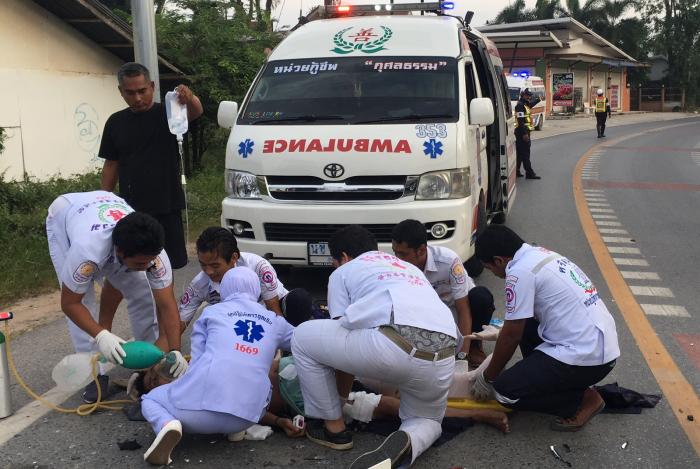 PHUKET: A man ended up in the Intensive Care Unit (ICU) and a woman was severely injured in a gruesome high-speed motorbike collision in Thalang yesterday morning.

Captain Suporn Muangkhai of Thalang Police received reports of the incident about 6:30am and arrived at the scene on Khaow Laan intersection, Srisoonthorn Road to find Kitti Chareonrat, 37, lying underneath a motorbike with a piece of metal embedded in one of his legs.

Capt Suporn confirmed that the other victim, named as Chutima Marsingthong, 21, was lying 5 meters away on the asphalt with a twisted left arm.

“Broken helmet visors and pieces of metal were strewn about at the scene,” said Capt Suporn.

“It took rescue workers about 15 minutes to remove the metal shard from Mr Kitti’s leg, which was still attached to the bike. Both Mr Kitti and Ms Chutima fractured their legs in the collision,” confirmed capt Suporn. “They were first taken to Thalang Hospital and later transferred to Vachira Phuket Hospital.”

Mr Kitti has been in and out of consciousness with labored breathing and was last reported to be in critical condition in the ICU.

“We are still investigating the crash but are having a hard time figuring out exactly what happened as there were no witnesses. For now we believe it was a head-on collision.”

The accident follows a series of foreign tourist deaths in rapid succession on Phuket’s wildly dangerous roads where death and mayhem haunt the island on an almost daily basis.

Pro-active law enforcement is famously absent, apart from the occasional public relations based “crackdown” evidenced by nothing more than (passive) checkpoints.