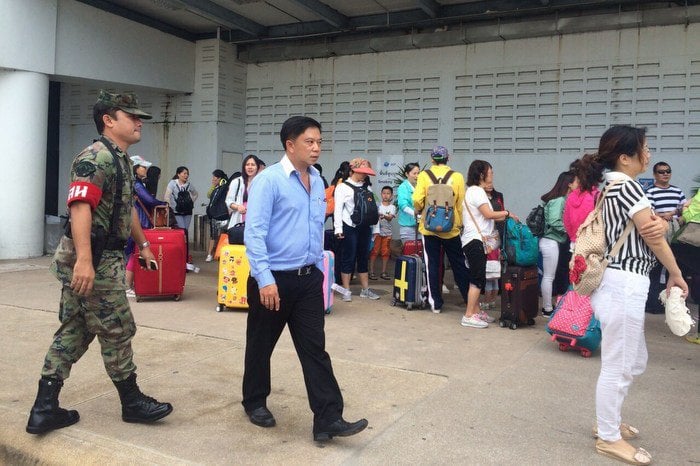 PHUKET: Twelve tour companies with foreign shareholders suspected of using Thai nominees to maintain control over their businesses have been given five days to submit documents proving their legality.

The Department of Special Investigations (DSI) mounted a raid on Thursday with Santi Pawai, director of the Ministry of Tourism and Sports (MOTS) Phuket office, and other relevant officials on 16 companies suspected of using Thai nominees.

“Yesterday, only four companies were able to provide us with documents to prove they are not using Thai nominees,” said Mr Santi, declining to name any of the companies inspected.

“The other 12 were either closed or did not have adequate documents. They were given five days to submit correct papers to us.

“If they fail to do so, they will be charged 4,000 baht for the first day past the deadline. If they are two days late, we will take legal action against them for concealing information.”

This latest set of raids is part of an island-wide inspection launched in May that is attempting to root out the practice of using Thai nominee shareholders to maintain control over a company (story here).

“We have checked 30 companies already. It takes time because the MOTS cannot go alone. We must inspect these companies with other relevant officials in tow, because the documents we are being shown are issued by many offices,” said Mr Santi.

Mr Santi explained that if a company is found to be guilty of using a Thai nominee, it will be forced to cease operation and the case will be handed over to the appropriate authorities for further action.

At this stage, the DSI has yet to take any action, as it is still waiting for documents to be handed over.

Officials also followed up on enforcing a set of regulations launched in February. Under these rules, all tour companies picking up clients at the airport have to present a job order providing the names of the tour guides, as well as detailed information about the tour and its guests, to military officers stationed at the airport (story here).

“We have the counter at the airport where companies must have their job orders stamped. However, we are facing issues with companies that do not pick up tourists at the airport,” Mr Santi explained.

“We now plan to set up counters at every entry point in Thailand. We expect to have these in place by next month.”

Mr Santi added that any company failing to have the job order stamped will be fined up to 10,000 baht.

All tour companies raided on Thursday were also informed about the heavy fines faced by tour leaders who fail to carry their tour guide ID card.

“All tour guides must have their card on their person at all times, not just a flag signifying that they are leading a tour. If the guides fail to carry their ID, they will be fined up to 100,000 baht,” Mr Santi said.

Tour guides who do not dress properly or look sloppy will also face the chopping block.

“All tour guides must dress appropriately. If they are improperly dressed, we will seize and hold their tour guide permit for up to 60 days,” he added.