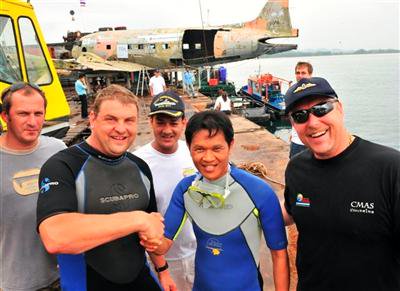 BANG TAO: Phuket Governor Preecha Ruangjan yesterday went to personally inspect progress on the sinking of the “Coral Reef Squadron”, an artificial reef project being sunk about two kilometers off the coast at Bang Tao Bay.

Like many newcomers to Phuket, the new governor, who comes from landlocked Phichit province, is allocating some time here to learn how to dive.

Rainer Gottwald, President of the Thai Dive Association’s Technical Committee that is overseeing work, said everything is going according to schedule despite some strong currents and poor visibility at the project site.

After the submarine inspection, Gov Preecha gave interviews to the national and international press urging people not to cancel their holidays and to visit Phuket to catch a glimpse of the island’s latest tourist attraction.

The sinking of the final Douglas C-47 Dakota Skytrain aircraft will take place tomorrow, when a big “grand opening” event is planned by the TDA, the For Sea Foundation, the Cherng Talay Tambon Administration Organization and many other state and local government agencies.