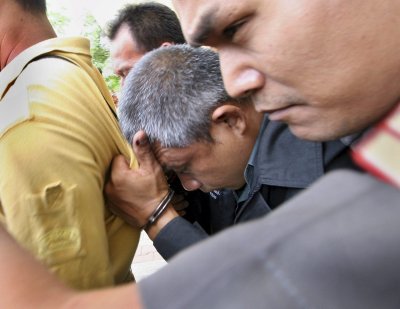 KANCHANABURI: Pol Sgt Somchai Wisetsingha has been handed a life sentence for the murders eight months ago of British tourists Adam Lloyd, 25, and Vanessa Arscott, 24.

The court had heard that, after an argument with Mr Lloyd, Somchai assaulted him and then shot him dead. As Ms Arscott fled from the scene Somchai ran her down with his Volvo car, dragging her 150 meters before stopping and shooting her, too.

Somchai, who was on the run for a month before turning himself in, initially admitted the killings, but later told the court that they had been carried out by one of his “spies”, whose name he said he did not know.

This tale failed to convince the court. Handing down the verdict today, Judge Dilok Bultaweenan said, “The prosecution’s witnesses and evidence have convinced the court that the defendant committed the crimes of intentionally killing one person and killing another in a bid to avoid prosecution for his first crime.”

He described Somchai’s “spy” claim as “groundless” and said that it “could not counter the prosecution’s witnesses.”

The court initially sentenced Somchai to death for the double murder but commuted this to a life term on the grounds that he had voluntarily surrendered to face trial and had, initially at least, admitted guilt.

The victims’ families hailed the verdict as just. “We trust the sentence given to this butcher of our children will be served in full,” said Mr Lloyd’s father, Brian.

“He showed them no mercy and cannot expect us to give him any mercy. We hope the justice system in Thailand will ensure no parole or reduction in sentences will ever be given,” he told reporters.