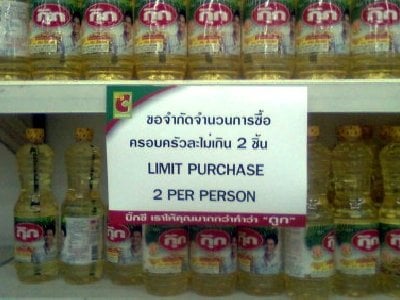 PHUKET: Retailers throughout Thailand have begun rationing the sale of bottled palm oil in a move to curb seasonal shortages.

Big C, on the bypass road, is limiting bottles of cooking oil to two per customer, while The Nation reports that Tesco Lotus is limiting sales to one bottle of palm oil per customer nationwide.

Mr Pramarn Urawan, a researcher at the Phuket Internal Trade Office, said part of the nationwide problem may be panic buying following news of possible shortages and price increases next year.

“Industries that depend heavily on palm oil usage may resort to stocking up to ensure that possible shortages will not affect their operations.

“Excessive panic buying then eventually leads to actual shortages, especially during this time of year when supply is already lagging,” Mr Pramarn said.

The price of crude palm oil has risen from 3 baht to 7.50 baht per kilogram. Costs of producing palm oil have been rising and shipments have been cut, according to statements from Tesco Lotus.

At the government-controlled selling price – 38 baht per bottle – Tesco reports it is losing money, since production costs are now 50 baht per bottle.

However, Mr Pramarn said that rationing palm oil should not have a significant effect on businesses in Phuket.

“Most consumers in Phuket use palm oil for cooking in households and restaurants. Although palm oil is one of the cheapest cooking oils on the market, there are substitutes readily available, such as soy oil and corn oil that can be bought for around 46 baht a bottle,” Mr Pramarn said.

The Department of Internal Trade has asked suppliers to release a stock of over two million bottles of palm oil to ease the current shortage, which is not expected to last into February, as palm oil production is expected to increase to its yearly peak by then.