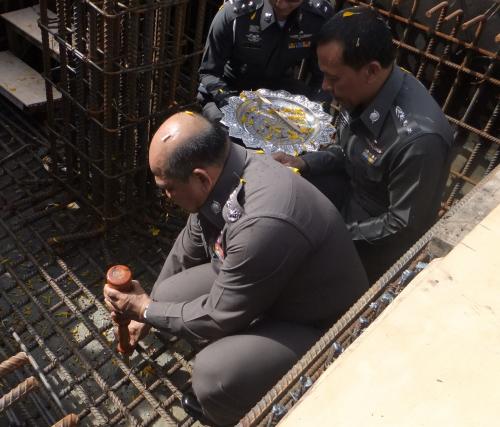 PHUKET: A ground breaking ceremony was held today to mark the construction of the new Region 8 Police headquarters, as plans go forward to move the office from Surat Thani to opposite the Tah Chat Chai checkpoint in Phuket.

The construction for the new building, expected to cost about 84 million baht, started on June 3 and is slated to be finished 555 days later on December 9, 2014.

“We chose Phuket for the new office because the province is special in that it generates the highest amount of revenue from tourism in Thailand, and we want to ensure the safety and confidence of all visitors and local residents,” Police Region 8 Commander Yongyuth Charoenvanit told the Phuket Gazette.

“The current headquarters in Surat Thani are very crowded. The new facility will be much bigger and more comfortable for our officers, and will improve our efficiency,” Lt Gen Yongyuth said.

The facilities will include a Scientific Crime Detection Center, a National Training Center, an officer ward and accommodation for officers.