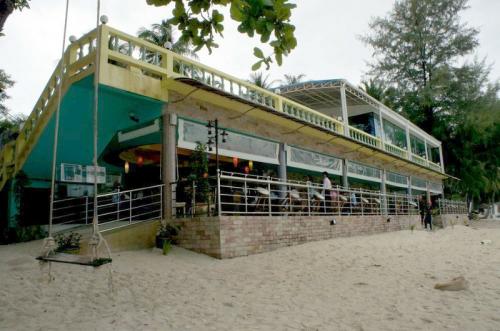 PHUKET: Phuket officials were ordered to take action today against a restaurant found to be illegally built and encroaching on the beach south of Patong.

“We ordered every relevant government organization to take action against the restaurant’s owner after we established that the restaurant was built on public property,” Chief of the Damrongtham Center Prapan Kanprasang told the Phuket Gazette.

Acting on a complaint received on June 27 alleging that the Tri Trang restaurant was encroaching on the beach and public property, Phuket Vice Governor Somkiet Sangkaosuttirak led an investigation team of Damrongtham Center, Phuket Marine Office and Phuket Land Office officers on July 16.

“We were able to determine that the restaurant had been built on public land and was encroaching on the beach area,” Mr Prapan said.

The restaurant has been open and serving customers for about two years, but has no land title, explained Mr Prapan.

“We did not find the owner or manager of the restaurant. There were only staffers present when we visited,” he said.

The Patong Municipality had asked police last year to prosecute the owner of the restaurant for illegal construction. That case is still under investigation, said Mr Prapan.

“We will ask the police to prosecute the owner for the beach encroachment,” Phuket Marine Office Chief Phuripat Theerakulpisut said.