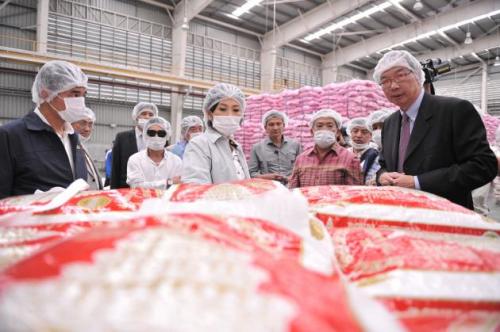 
Rice importers unfazed as tests approved
The Nation / Phuket Gazette
PHUKET: As the government scurries to restore consumer confidence in Thai rice, buyers abroad are unfazed by problems with pesticides and fumigation.

“Those countries understand there’s a need for fumigation to get rid of insects,” Wallop, who is also managing director of Capital Rice, told a seminar on Thai rice quality that was held after the use of methyl bromide and phosphine became controversial.

The Thai Rice Packer Association and Foundation for Consumers yesterday agreed to conduct regular joint tests on all brands of packed rice registered with the association and sold in the market. This move came after tests ordered by the foundation and conducted by an independent lab found traces of methyl bromide in more than 70 per cent of 46 bagged rice samples.

State agencies also plan to launch a programme of quality checks of rice in granaries and wholesale and retail shops.

The random tests will be performed by a third party accredited by international inspection agencies, said Krongthip Thanatvornlap, secretary-general of the rice packers association.

The laboratory is expected to take four days to study the samples and the test results will be revealed to the public via the association’s website every month. People can learn the contamination level of agricultural chemical substances of each brand registered with the association.

“All manufacturers who are association members have complied with the United Nations’ Food and Agriculture Organisation’s codex,” she said.

Saree Ongsomwang, secretary-general of the Foundation for Consumers, said her organisation agreed to regular joint tests of packaged rice. She claimed that the lab the foundation used was certified, but declined to identify it.

The foundation said it wanted to protect the lab’s privacy and did not want the lab to suffer from any political pressure.

The Thai Rice Packer Association has pressured the Foundation for Consumers to identify the lab.

Prime Minister Yingluck Shinawatra said all parties should help prevent small issues from affecting Thai rice exports. She was visiting the rice packing premises of CP Intertrade Co in Ayutthaya with a large contingent of officials and media personnel.

The association’s Krongthip, who is also a vice president of Sandee Rice Co, said the association needed to know the name of the inspection agency hired by the foundation so that it could show the test results to its 140 members and help them improve their production process.

“We really want to know the lot number of the packed rice samples that had been taken to run the test and the date that they had taken the samples from the shelves. We also want to know the inspection agency that had done the test,” she said.

Krongthip is now considering whether to sue the foundation, she said.


Abhisit ready to back people’s amnesty bill
The Nation / Phuket Gazette
PHUKET: Democrat Party leader Abhisit Vejjajiva said yesterday that he was prepared to back an amnesty bill proposed by relatives of the victims of the 2010 crackdown, provided the government withdraws all previous versions of the amnesty bill proposed to Parliament.

“I am discussing with others in my party whether or not the opposition can accept [the bill], if the government withdraws all versions of the amnesty bill that has already been proposed to Parliament, and uses this ‘people’s version’ as a model for unofficial dialogue. The core principle of the bill would cover all groups but would not let those who set fires and those who violated Article 112 [the lese majeste law] go unpunished. I think we can move on with this,” he said.

Payao Akahad, mother of Kamolked – a paramedic who was killed in the crackdown – and Punsak Srithep, father of 17-year-old Samapun, who was killed in crossfire, on Tuesday submitted the group’s version of the amnesty bill to Prime Minister Yingluck Shinawatra, via her deputy Phongthep Thepkanjana.


Ranong authorities asked to mark border
The Nation / Phuket Gazette
PHUKET: A group of people who are relatives of the 92 Thai nationals who were apprehended in Myanmar last year for alleged trespassing submitted a request to Ranong provincial authorities yesterday asking for officials to help redo the border demarcation in a section of Kra Buri district.

The group, travelling in a 30-vehicle convoy, submitted a written request with a senior official. In the request, the group called on Ranong Governor Cherdsak Jampathes to push for a provincial committee to be set up to work further on the demarcation line and retrieve all belongings of the 92 Thais that were seized by the Myanmar authorities.

Jeerawat sae-Ueng, one of the group’s leaders, said he believed that the 44-square-kilometre area where the 92 Thais had settled and taken up farming before being apprehended by Myanmar troops was actually Thai territory.

Quoting the owner of Song Charoen Gold Shop, a senior DSI official said the former monk – known as Luang Pu Nenkham – had sold gold ornaments to her through his relatives on several occasions.

The shop owner Kesinee Obomkul, who also owns a housing estate in Muang district, said Wirapol had bought three houses from her but only paid for one.

DSI official Angsukate Wisutwatthanasak said the home that Wirapol had paid for in the Phet Phailin estate would be seized if it was found to have been bought by money donated to him for charitable purposes.

Angsukate also quoted Kesinee as saying that Wirapol did not pay for the Bt2.8-million house in the form of gold ornaments, though she did not provide details on the amount of gold he sold to her.

Separately, a DSI team visited a used-car dealership and spoke to the owner, who said he had nothing to do with Wirapol’s purchase of luxury cars or the transfer of ownership.