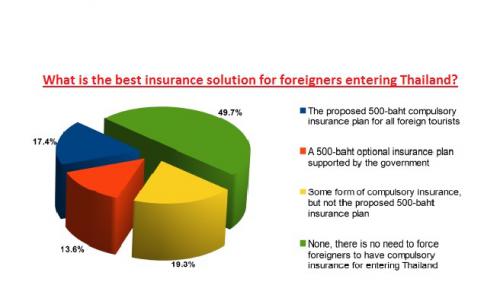 PHUKET: A clear majority of Thai nationals believe foreigners should not be compelled to buy health insurance when entering Thailand, but fewer than half of all tourists and expats living in the country shared that view, at least according to the results of the latest Phuket Gazette online readers’ poll.

The poll – asking “What is the best insurance solution for foreigners entering Thailand?” – was drawn up after Public Health Minister Pradit Sintavanarong announced that related agencies were discussing a plan to charge tourists for compulsory health coverage, up to 500 baht for a three- to 30-day stay, and 30 baht for stays of less than three days (story here).

Voters in the poll delivered a wide spread of responses to the question, with 49.7% of respondents overall voting, “None, there is no need to force foreigners to have compulsory insurance for entering Thailand.”

Of the other options, 19.3% of respondents voted, “Some form of compulsory insurance, but not the proposed 500-baht insurance plan.”

However, a whopping 80% of respondents presenting themselves as Thai nationals voted the top choice, that there was no need to force foreigners to have compulsory insurance for entering Thailand.

Yet Thai nationals taking part in the poll were outvoted by more than 10 to 1 by foreigners, whose opinions varied greatly.

If the poll results highlight anything, it is that nearly all respondents support foreigners’ right to make their own healthcare choices.

To take part in the Gazette‘s newest poll, asking what single feature draws the most tourists from around the world to Phuket, click here.

Body believed to be western woman retrieved from water off Ranong, brought to Phuket