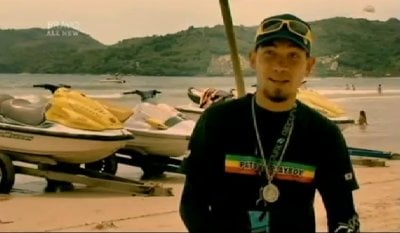 PHUKET CITY: The Thai television company responsible for producing the Big Trouble in Tourist Thailand series, which featured footage of an alleged jet-ski scam on Phuket, is to be prosecuted, the Bangkok Post reported today.

The managers of Black Sheep Productions, which produced the show, could face 12 months in jail and fines of up to a million baht, the report said.

The first episode of the series showed a Patong jet-ski operator, Winai ‘JJ’ Naiman, extracting 35,000 baht from a group of British Royal Navy Marines in compensation for ‘damage’ to one of his vehicles.

At one point, Mr Winai was shown holding an air rifle as he argued aggressively with the men, who denied damaging the jet-ski.

As well as being broadcast on British TV, the show has been uploaded to YouTube, causing uproar among those who say jet-ski scamming is rife on Phuket’s beaches.

In today’s Bangkok Post report, Wanasiri Morakul, director of the Thailand Film Office, is quoted as saying those responsible for the show had violated Article 34 of the motion picture law by failing to submit the footage to the Tourism and Sports Ministry for approval before its broadcast abroad.

Director-general of the Office of Tourism Development, Seksan Nakawong, reportedly said the film-makers had violated Article 23 of the same law for making a film damaging to Thailand’s reputation.

Meanwhile, Region 8 police chief Lt Gen Santhan Chayanont has suggested the TV show was a deliberate attempt to tarnish the image of Thai tourism and the police force.

Lt Gen Santhan said many of the scenes, including those showing Mr Winai arguing with the British marines, looked like a set-up.

Gavin Hill, the British producer of the series, denies the allegations, saying the show was neither fake nor stage-managed.

A crucial meeting at Patong Municipality offices this afternoon will aim to hammer out details of a compulsory insurance scheme for the island’s jet-ski industry.

It is hoped such a scheme will put a stop to rip-offs and disputes on the island’s beaches.

Critics say it will be impossible to find an insurance company willing to insure unlicensed, potentially intoxicated tourists on the vehicles.